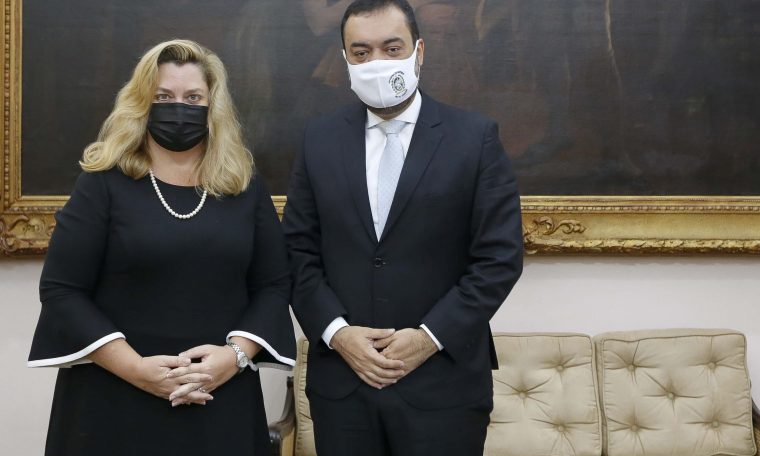 The aim of the meeting was to strengthen diplomatic relations between Brazil and the US.

Governor Claudio Castro meets with the US Consul General in Rio de Janeiro, Jacqueline Ward, at the Guanabara Palace this Tuesday (2/22). The aim of the meeting is to strengthen diplomatic relations between Brazil and the United States. Also got an opportunity to talk about the main functions and programs of the state government. The Secretary of State for the Civil House, Nicola Michione, and the Consul General for Political Affairs, Jason Conroy, were also present. During the meeting, Castro presented an overview of the concession of sanitation services, talked about the Integrated City and Forest Programs of Tomorrow, as well as actions aimed at public safety and the status of Petropolis.

The doors of the Rio government are open. In order to further improve our relationship, in addition to enabling us to work in an integrated manner, it is extremely important to strengthen our links with the US and other countries – the governor highlighted.
On this occasion, Ward spoke to the United States Government, through USAID (United States Agency for International Development), about a donation of R$520,000 to the United States Government, for immediate assistance to displaced families in Petropolis due to heavy rains in the municipality. The money will be used to distribute personal hygiene, cleaning and food safety kits.

I had a wonderful meeting with Governor Claudio Castro, where we discussed ways to deepen our historic partnership ties. I also reiterated to the governor our solidarity with the victims of the Petropolis tragedy and our efforts to help them – said the consul.

See also  China. The eyes of the world in the Indo-Pacific

Governor Claudio Castro meets with the Consul General of the United States of America in Rio de Janeiro, Jacqueline Ward, this Tuesday (22/02), in the Palacio Guanabara.