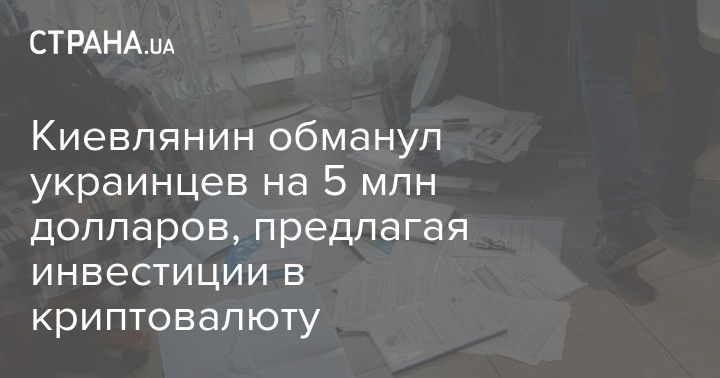 In Kiev, a 55-year-old man drew money from gullible citizens under the guise of investing in cryptocurrencies. Dozens of Ukrainians suffered losses under the attacker’s plan, totaling $ 5 million.

This was reported by the press service of the Kiev City Prosecutor’s Office on its Facebook page.

Law enforcement officials exposed and suspected the organizer of a scheme of fraudulent appropriation of funds of the citizens of Ukraine under the pretext of investing in cryptocurrencies and managing assets on international stock exchanges (Part 4, Part 4 of Article 190 of the Criminal Code of Ukraine ).

During the investigation, it was found that the 55-year-old suspect drew money from gullible citizens under the guise of investing in lucrative projects to obtain super, giving the victims the impression of a man trading on international stock exchanges. Profits.

Specifically, for the illegal activities indicated, the man, together with his associates, opened fictitious companies with similar names to well-known international stock exchanges and brokerage companies in the territory of foreign states.

To meet with “potential” investors, the attackers rented an office in the center of Kiev and built pseudo-platforms on the Internet that simulated electronic trading and displayed charts such as cryptocurrencies and the rise / fall in the value of stocks Done. Thus. ” Scammers made an appearance of actual activity, ”- told the prosecutor’s office.

According to preliminary data from law enforcement officials, under the scheme, the attackers defrauded dozens of Ukrainian civilians for a total of around 5 million.

“Based on the results of the center’s documents and searches, during which irrefutable evidence of criminal actions was seized, the organizer of the illegal scheme was suspected of committing massive fraud,” the press center said.

At the moment, the issue of choosing a preventive measure for the suspect is being decided. Other participants of the criminal scheme are being identified.

Earlier, “Strana” reported that a Kievite sold data from 50 databases of state structures for cryptocurrencies. The man published advertisements for the sale of information on specialized hacker forums.

We remember too Uncovered a scamster in Kiev, who offered to invest in an online business… The culprit defrauded more than 500 people, each of whom paid 12,000 to 60,000 dollars.