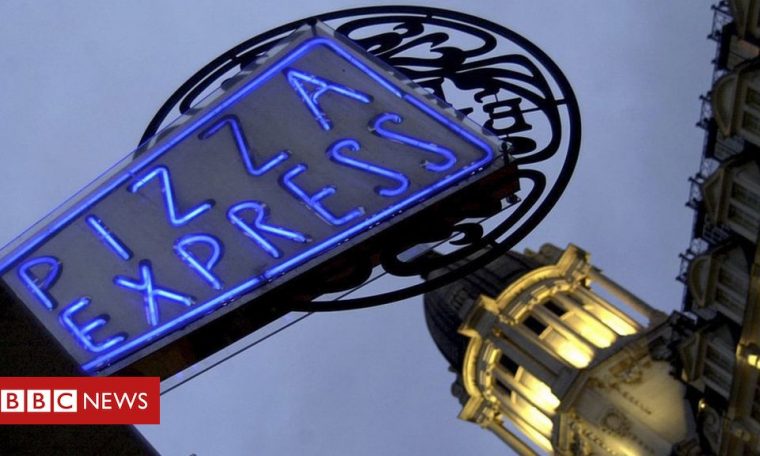 Pizza Express is considering closing 67 of its UK restaurants, which would mean the loss of 1,100 jobs.

The chain is the latest High Street outlet to undertake a restructuring of its business after trading was halted by the coronavirus pandemic.

The news comes just a day after the government launched its Eat Out to Help Out plan to boost the restaurant trade.

Pizza Express would not say which of its 449 UK outlets were possible targets for closure.

It currently has 166 restaurants open, all of which are taking part in Chancellor Rishi Sunak’s £10 off meal deal.

All its UK outlets had been closed since lockdown began on 23 March. They began reopening in July when lockdown rules were eased.

Pizza Express said in Tuesday’s statement that customer demand had been “encouraging” at the restaurants which had reopened and that plans for further re-openings were well underway.

The company said restructuring the business would put it on a stronger financial footing in the new socially distanced environment.

If all 67 outlets are closed, that would mean the loss of 15% of its restaurants, but it said the final outcome was yet to be decided.

The big problem for Pizza Express has been its huge debts.

More than one billion pounds worth, a sum which was unsustainable.

The payments to service its borrowing wiped out its profits over the last two years.

A major restructuring has been in the offing for more than a year, long before the pandemic loomed.

Debt has been the serial killer for so many companies, from Carillion to Thomas Cook.

Unlike a lot of its rivals, 95% of its restaurants are understood to be profitable.

The hope is this plan will be enough to strengthen Pizza Express’s finances and put it on a more secure footing.

But it will probably fall into the hands of its lenders as a result unless a buyer comes forward.

Zoe Bowley, UK and Ireland managing director for Pizza Express, said that while the financial restructuring would be a “positive step forward”, the closures would be “incredibly sad for our Pizza Express family and we will do everything we can to support our teams at this time”.

Many took to social media to comment. Some blamed investors for being greedy, while others said High Street chains needed more help:

Not all were sorry to see it go:

The Woking branch, which Prince Andrew referenced during his interview about his links to Jeffrey Epstein, was singled out for a number of wry remarks:

Previously, Pizza Express has said the majority of its restaurants are profitable.

Pizza Express has heavy debts and last year was known to have started talks to put its debts of more than £1bn on more favourable terms.

It is expected to announce a Company Voluntary Arrangement (CVA) in the near future, which is an insolvency procedure that allows a company with debt problems to reach agreement with creditors regarding payment of all, or part of its debts.

A brief history of Pizza Express

1965: Pizza Express founder, the late Peter Boizot, brought a pizza oven from Napoli and a chef from Sicily to open his first restaurant in London’s Soho.

1992: Mr Boizot grew his empire over the following almost-three decades before selling it for £15m to Hugh Osmond and Luke Johnson, the man who was – until recently – chairman of Patisserie Valerie. They floated it on the stock market the next year and ultimately sold out in 1997 when it was worth £150m.

2003: It was taken private again in a £278m deal by two private equity firms who then floated it two years later – although it lasted less than a year on the public markets before it was returned to private equity hands.

2014: It changed hands again, this time to be acquired for £900m by its current owner, Chinese private equity house Hony Capital.

Andy Pellington, group chief finance officer at Pizza Express, said: “While we have had to make some very difficult decisions, none of which has been taken lightly, we are confident in the actions being taken to reduce the level of debt, create a more focused business and improve the operational performance, all of which puts us in a much stronger position.”

Julian Cox, partner at law firm BLM said: “Pizza Express is yet another household name that has been pushed to the brink by Covid-19.

“Whilst the government has attempted to encourage people through the doors with ‘Eat Out to Help Out’, the initiative is clearly not going to be enough to protect the sector in the long term.”

We’re only a few days into August, and already nearly 4,500 jobs have been lost as the furlough scheme starts to wind down.

Here, courtesy of the Press Association news agency, is a list of major employers that have announced that jobs will be lost, or are at risk, since the start of the pandemic.

May 28: Debenhams (in second announcement) – “hundreds” of jobs