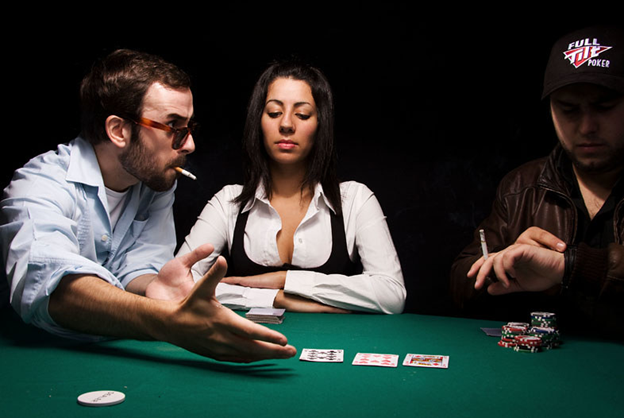 Poker is a popular game that has attracted thousands of players across the globe. For this reason, many tournaments such as the World Series of Poker are often organized to accommodate the large pool of gamers. Such events attract players from all walks of life, including entertainers, sports stars, and actors. These are mainly celebrities who are endowed with huge bankrolls to splash in the game. Most of them have become proficient, as you will find them in casinos playing famous games like Texas Hold’em. However, some like Tiger Woods are terrible at it. Below are some of the celebrities that have mastered this art.

This is a Hollywood actress who has had a fair share of success. She developed an interest in playing poker from her father, and she boasts of more than a million-dollar income from poker. In 2005, she participated in the Ladies No-Limit Texas Hold’em event and won a WSOP bracelet. Her boyfriend, Phil Laak, adds up as her coach, and they have been dating since 2004. Surprisingly, she was in another relationship with Sam Simon, a poker player, but they separated in 1991.

This is one of the few Hollywood celebrities with a high-ranking poker award on their resume. During the 2004 California State Poker Championships, Ben Affleck won $356,400 playing poker. Affleck accredits his poker skills to Amir Vahedi and Daniel Negreanu. In one of his playing moments in the Hard Rock Casino, he was accused of card counting, where he was subsequently banned.

See also  As US and China pressure consulates to close, the possibility of missteps and spiraling tensions rises

Known by the tag “Action Bob”, Jean Robert has branded himself as a fearless and charismatic poker player. In 2018, he won his first WSOP bracelet, and currently, he is a regular gamer in Macau. Bellande has also competed in “Survivor, China”, but he was eliminated to join the jury panel. JRB has very active social media pages, and he boasts millions of followers. He admits that he has won and lost millions in high-stakes games. Additionally, he has also made over $2.9 million from tournaments.

Behbehani is a renowned, high-roller poker player with over $3.4 million in live poker tournament winnings. He is said to be a member of one of Kuwait’s wealthiest families. He first cashed his live poker winnings in 2008 while playing at the Caesars Palace in Las Vegas, taking home $1,023. In the last three years, he has cashed 16 times and made 9 final tables. He has played in both land-based and online-based casinos.

As an aspiring poker player in Kuwait, you can get started by first understanding the basics of playing online poker, where you can play for free before risking your own money. Guides on the best online casinos in Kuwait will come in handy since you get to learn about the available games, recommendable payment methods, and the safety of playing at licensed and regulated Kuwait casinos. You will also find gambling tips and strategies to help you get started.

The rise of Matt can be traced to the ‘Rounders’ movie, which is regarded as the best gambling movie. His role appealed to many poker fans. While starring in Hollywood movies, he complimented his fame with occasional visits to The World Series of Poker. Although he took part in the infamous “Molly’s Game”, he has always played his game away from the limelight. In the ‘Rounders’ movie, he took up a role that has since inspired many poker enthusiasts to become professional gamers.

This is arguably one of the richest actors in the world. For every movie he features, he demands not less than $25 million. Some of the popular releases where he has featured include Pawn Sacrifice, Seabiscuit, and Spider-Man. Apart from acting, Maguire has an outstanding interest in poker, where he plays both online and live poker. In one of the events, Maguire is said to have taken part in a high-stakes poker game with other actors, including Ben Affleck and Matt Damon. No doubt that colossal sums of money changed hands on that day. These games were later put together to form Molly’s Game movie based on true events.