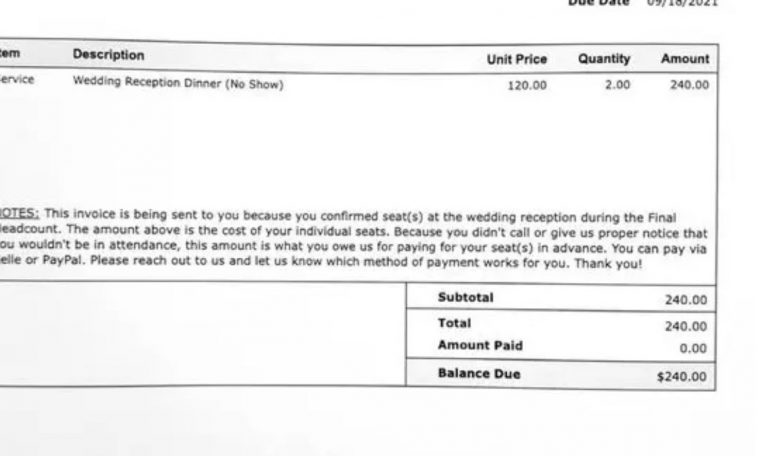 A couple from Chicago, United States sent an invoice of US$240 (about R$1,250 in direct payment) to guests who confirmed their attendance but did not attend the wedding party. According to the NY Post, Doug Simmons, 44, and Deidra McGee, 43, were so angry at the absence that they decided to take action.

When sent to future guests, the status is communicated. “This challan is being sent to you because you confirmed the seat at my wedding reception at the last count. Since you did not call us or give us proper notice that you will not be present, this is the amount you get from us. Seat(s) must be paid in advance. You can pay via Zelle or PayPal. Contact us and let us know which payment method works for you. Thank you!” Invoice says.

To the NY Post, Doug said he’s not the kind of person who usually takes money from others, but in this case, it’s not about the money, but the injury caused by the guests. The ceremony, with over 100 participants, took place at a resort in Jamaica.

“Four times we asked: Are you available to come? And they kept saying: Yes,” said the groom. “We had to pay and it was a wedding held in Jamaica. Nobody said anything or texted me: Hey, we can’t go. That’s all I was asking. But don’t say anything and still me Make you and pay for you. Four people became eight people. I took it personally,” he said.