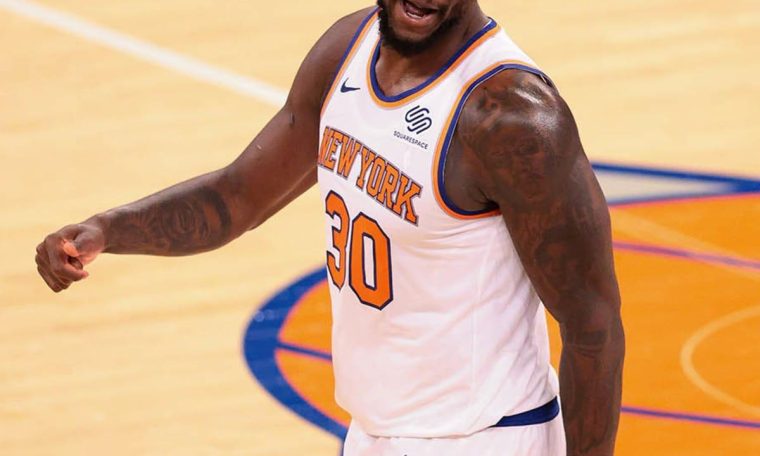 New York Knicks head coach Tom Thibodeau has come to the defense of Julius Randle following some harsh criticism from fans. Randle, 27, was an important player for NY last season and was named the Most Improved Player.

But, with the Knicks not doing as well this term, the forward has been blamed for a lot that has gone wrong with the team.

Thibs, for one, isn’t having it and has lashed out at Randle’s detractors.

“That’s the day and age of social media. That’s why you don’t pay attention to it. It doesn’t matter. …It’s like the backup quarterback,” he said. “Everybody thinks he should start until he starts.”

Randle has actually been playing pretty well this term, statistically at least, scoring 19.3 points per game along with 10.0 rebounds and 5.0 assists while shooting 41.7 percent from the field. The player has shared his own take on the reason the Knicks are struggling.

“I just think we gotta understand that in order to win games we gotta play really hard, extremely hard. We gotta have game plan discipline, and we gotta win games on defense. If our offense is great, great. That’s just a bonus. But who we are as a team, how we built this team and this culture is just fighting defensively, the togetherness, just the effort, the hustle plays. I feel like that’s what the city of New York loves. That’s what the fans love — when they know we’re out there giving it our all.”

The Knicks currently sit at 11th in the Eastern Conference and are 9/2 to make the playoffs this season after qualifying for postseason play for the first time since 2013 last year. Fans looking to bet on the Knicks’ prospects could get risk-free bets worth up to $1000 from WynnBET Sportsbook New York when it launches in NY.

Meanwhile, the neighboring Brooklyn Nets are favored for the NBA championship, with fans able to pick up odds of 13/5 on that front.

Thibodeau will hope to get even more production from Randle as the season wears on but has run into some trouble with point guard Kemba Walker. The former Charlotte Hornets star was enjoying a resurgence after being brought back into the team on the back of the head coach freezing him out.

The player was ruled out against the Oklahoma City Thunder on Friday due to left knee soreness, cutting the run of form that saw him named Eastern Conference Player of the Week short.

Walker has a history of knee issues as he suffers from arthritis and it is unclear when he might be back. He played in back-to-back games against the Minnesota Timberwolves and Detroit Pistons recently, after not being involved in such schedules with the Boston Celtics, who tried their best to manage him.

This Week in Knicks Basketball 🏀

“It was last minute,’’ Thibodeau said of the problem. “He was warming up, and something didn’t feel right. So, I haven’t talked to the trainers yet. It was a last-minute scratch.’’

“I don’t know, because he started his warm-up, and then he stopped,” the coach responded when quizzed on the seriousness of the injury. “And then [trainer] Anthony [Goenaga] was looking at him and just felt, let’s get him examined, and then we’ll go from there.’’

Walker was unable to introduce himself to the OKC fans after being traded there last season due to problems with his knee. The Thunder traded for the guard in June in an attempt to do away with Al Horford’s bad contract and got a first-round pick as part of the deal.

An NBA executive revealed the player spent a week meeting staff, working out, and doing physicals after the deal was sealed yet he wasn’t able to play. He was able to secure a move to New York, where he was born, during free agency. The Knicks had a league-high cap space and were in need of a point guard.

The likes of Chris Paul, Kyle Lowry, and Spencer Dinwiddie became unavailable and it’s believed that they had no interest in Lonzo Ball.

Things have hardly gone according to plan for the player, though, having found himself exiled for several games. Having come back to prove his worth, he’s now sidelined by injury.