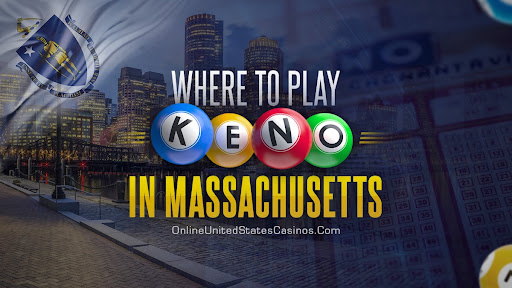 The landing place of the Mayflower and the Pilgrims is best known for its many universities and renowned hospitals. Thus, when the topic of gambling springs up, it is not amongst the top US states that come to mind. Nevertheless, it allows casino gaming, parimutuel horse wagering, charitable gambling, and lotteries. The Massachusetts Gaming Commission regulates these, and the thing that they have in common is that the venues that supply these gambling options can also frequently offer keno fun. However, this rule of thumb does not apply in every state.

While most laypeople do not consider keno a serious gambling game, it is one that many top-end venues provide, along with pretty much every state lottery. Invented back in Ancient China, keno rose to prominence in the US during the 19th century, and it achieved mainstream status in the 1960s when Nevada went all-in on gambling. In the Bay State, keno can mainly get found at bars, even though Massachusetts has dedicated parlors, and everyone is free to play the state lottery or make different types of keno bets online at interactive gaming sites.

Below, we look at the best keno options that Massachusettsans can enjoy without leaving their state’s borders.

The Massachusetts State Lottery started selling tickets in March 1972, following a 1971 legislative change that allowed the local government to create a lottery draw to gather aid for its 351 cities and towns. In 1973, the lottery introduced bingo through a division known as Charitable Gaming, and Keno entered the mix in 1993. Massachusetts Lottery Keno is the traditional version of the game, where players can choose up to twelve numbers from a range of one to eighty. Bet sizes in this nationwide draw go as low as $1 and as high as $20. Keno rounds happen every four minutes, starting at 5 AM and ending at 1 AM.

Located on One MGM Way in Springfield, in the heart of the city’s Metro Center, the MGM Springfield was the first resort casino in the Commonwealth, opened in 2018. Its gaming floor stretches 125,000 feet, housing over 2,500 slots and one hundred and twenty game tables. The venue also has a VIP gaming area and a 23-table poker room. Food-wise, its visitors can have their pick from multiple high-end joints. The Chandler Steakhouse and Costa’s are the two best-reviewed fine dining on-premises restaurants. That said, the TAP Sports Bar is the place to be for burgers, drinks, and Mass Lottery-fueled keno entertainment. Servers sell slips, and patrons can watch draw results presented on big screens throughout the establishment.

The Corner Pub is a downtown Boston bar found at 162 Lincoln Street. Those strolling through the city’s Leather District will easily come across it. It is a family-owned establishment operating since 2008 that serves craft beers and hand-formed burgers. The bar has no live music but supplies recognizable and pleasing tunes via its old-timey jukebox. The Corner Pub is not a very spacious spot, but it has a welcoming atmosphere, inexpensive food, gaming machines, and keno. The service here gets universally praised, and the prices are super low by Boston standards.

Biddy Early’s is an Irish-themed pub on 141 Pearl Street in Boston’s financial district. Its management claims that it is the “best damn dive bar in Boston” open every day of the week until 2 AM. Though, its kitchen closes at 10 PM every night. It serves basic Irish comfort food and pitchers of beer. There are $4 drafts on hand here and a keno board for everyone willing to test their luck to enjoy. Please note that, same as the Corner Pub, Biddy Early’s in Boston does not boast a ton of room. Its ambiance is cozy, and Biddy’s capacity gets limited to around fifty people or so. Darts and other social games are also available.

Taking a break from Boston, we chose to spotlight a downtown Malden American-style restaurant on 139 Pleasant Street. It accepts reservations through Resy.com and is not open on Mondays and Tuesdays. The exceptional food aside, a reason to visit this eatery is that it often features intimate live acoustic performances. It also runs different-style events, such as Tag-Team Trivia and keno nights.

Same as Biddy Early’s Corner Café is another Boston dive bar. However, it is on 87 Prince Street and does not feature Emerald Isle motifs. In essence, this is a neighborhood hangout that offers cheap drinks, sports TV, and keno in a down-to-earth setting. It is a two-minute walk from Old North Church, open from 8 AM to 2 AM every day of the week, except for Sundays. The pudding shot is this place’s specialty, with the pistachio one ranking high.

Shelly Schiff has been working in the gambling industry since 2009, mainly on the digital side of things, employed by OUSC. However, over her eleven-year career, Shelly has provided content for many other top interactive gaming websites. She knows all there is to know about slots and has in-depth knowledge of the most popular table games. Her golden retriever Garry occupies most of her leisure time. Though, when she can, she loves reading Jim Thompson-like crime novels.