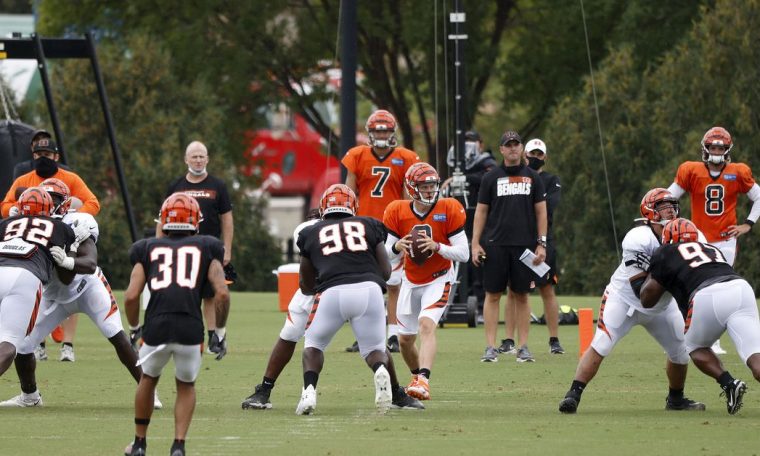 The second intrasquad scrimmage for the Cincinnati Bengals kicked off early Sunday evening inside the empty but loud Paul Brown Stadium. The team pumped fake crowd noise to simulate sound for the team to work around in the huddle and during the entire pre-snap phase, but this noise wasn’t the noise on the minds of Bengals fans.

Injury talk has Cincinnati on the edge of their seats. A.J. Green and Joe Mixon were both in street clothes as they watched the scrimmage from the sideline along with Carlos Dunlap and Carl Lawson. Shawn Williams, Jordan Evans, and Darius Phillips also did not participate in the scrimmage, but those three were seen doing rehab work beforehand.

A lot of work at wide receiver, edge defender, and cornerback was distributed amongst multiple players vying for significant playing time. By way of radio or Twitter, here are the things we learned from Sunday night’s scrimmage.

The first three throws that left Joe Burrow’s right hand went incomplete. A.J. Green and John Ross couldn’t join him on the field, but Burrow’s been working without those two for most of training camp. Burrow’s also been the bounce back king during camp as well, so when he completed nine of his next 10 passes, it wasn’t any kind of surprise.

Joe Burrow was 6/9 on the first drive. The first-team defense kept the offense out of the end zone #Bengals

Burrow ended up getting six drives under his belt. Multiple reports have him completing 19 passes and one score, and a few of those completions came on third down.

On a pass that reached the end zone during his fourth drive, Burrow was intercepted by Jessie Bates, but the play was retroactively called a pass interference on Vonn Bell, who had collided with Mike Thomas.

Burrow’s unofficial stat line looks fine considering the players who weren’t able to play with him. When asked about it himself, Burrow wasn’t too impressed with himself.

“Uhhhh, it’s not my best,” Burrow said. “Still confident we’ll be ready for the first game, but it’s not what you’d like to see today.”

After Burrow spoke, Zac Taylor did not hesitate in naming Burrow as the Week 1 starter. He also must’ve received access to his birth certificate because he changed his middle name to “Poise.”

Zac Taylor: Joe’s middle name is Poise. Not much fazes him. Says he feels comfortable naming him Week 1 starter. @WCPO

By their own scoring, the Bengals’ defense won the day, 22-13. Burrow’s day in the red zone included no touchdowns, so that’s where the defense got their points. Considering how terrible Cincinnati’s offense was inside the 20-yard line last year, they’re going to be judged heavily on their red zone efficiency this season. Getting a score near the end zone during Thursday’s mock game is something for the offense to work for.

It’s easier to name the pass-catchers who weren’t targeted on Thursday night.

Everyone from Stanley Morgan to DaMarkus Lodge to Scotty Washington were on the receiving end of successful throws from the Bengals’ youthful duo at quarterback. And while Ryan Finley was intercepted once and nearly two more times, he found Washington over-the-middle for a 23-yard touchdown.

Of course it was Boyd that was the recipient of Burrow’s lone touchdown. It’s been nice hearing about the chemistry Burrow has been forming with Auden Tate and Mike Thomas, but it’s Boyd who is the proven veteran and the betting favorite to be the team’s leading receiver come December.

TB (Tyler Boyd) is going to have a big season I think. I have a great connection with him right now – Joe Burrow

Injuries have lately hindered top options for the Bengals at running back and wide receiver. Coincidentally, the tight end position group has been receiving praise by Bengals Radio analyst Dave Lapham and Taylor himself. Despite this, no one was prepared to see the position group so heavily featured early in the scrimmage.

Uzomah figures to get the majority of looks in the passing game, but a Drew Sample breakout season isn’t out of the question if the playbook favors the position with injuries hitting other skill players.

Edging out the depth

No Dunlap or Lawson meant that rookie fifth-round pick Khalid Kareem got the start as the opposite edge defender to Sam Hubbard. After the defense added players such as Amani Bledsoe and Bryce Sterk, it’s nice to hear Kareem remain right behind Dunlap on the depth chart.

Not much was mentioned about Kareem’s night, but Hubbard was a consistent presence. He went back and forth with Bobby Hart and beat rookie Hakeem Adeniji on the way to a would-be sack on Finley.

Hubbard also got the nod for a sack on a play that originally was counted as a Burrow touchdown.

What’s around the corner

Without Phillips, the battle at cornerback got a little mysterious on Sunday. The assumption is that LeShaun Sims got the nod to start, and considering he’s been having a good camp compared to Winston Rose, he seems to be the clear No. 2 option behind Phillips for that job.

It would’ve been nice if Tony Brown hauled in at least one of his two dropped interceptions, but his work with the second team isn’t going unnoticed.

Going from literal to figurative terms now, the Bengals have a few days to prepare for their “Mock Game” this week, and perhaps it will see A.J. Green catch balls from Burrow in a game-like situation for the first time. There are questions to be answered along both the offensive and defensive lines as well as in the secondary, but the defense got the better of Burrow’s offense when it counted Sunday night. If there’s one thing we already know about Burrow, it’s that he doesn’t stay down for long.