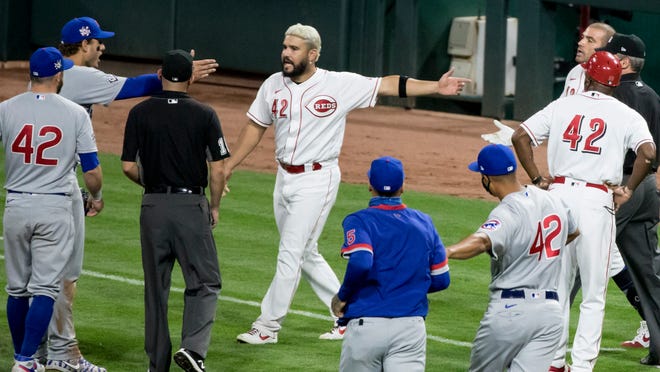 A few of high fastballs led to the benches clearing and five ejections in between the Cincinnati Reds and Chicago Cubs in Recreation 2 of their doubleheader Saturday.

Reds commencing pitcher Tejay Antone threw a 96-mph fastball that sailed about Anthony Rizzo’s head in the fourth inning. Rizzo and the Cubs’ bench evidently took exception to it. Antone looked at his hand soon after he threw the pitch.

The umpires huddled and issued warnings to both benches. Just after detailing the warnings to professionals from both of those groups, household-plate umpire Nic Lentz ejected Cubs catching mentor Mike Borzello from the dugout. Cubs manager David Ross came out of the dugout to argue and was ejected.

It was the to start with time Ross was ejected in his managerial profession.

“That was intentional,” Ross stated afterward. “No doubt in my mind.”

Rizzo strike two solo homers in Game 1 of the doubleheader and he hit a double in his to start with at-bat of Video game 2.

In the bottom fifty percent of the fourth inning, Cubs reliever Adbert Alzolay threw a higher fastball to Shogo Akiyama. Joey Votto and Kyle Schwarber exchanged phrases from their dugouts.

Reds manager David Bell jogged on to the area to confer with Lentz and crew main Angel Hernandez. About a moment into Bell’s talk with the umpires, Rizzo appeared to explain to Bell that the delay was having also prolonged, prompting the benches to crystal clear.

There was no pushing or punches thrown, just terms exchanged alongside the 1st-base line. The Reds experienced a few individuals ejected: Bell, Votto and Jesse Winker. Votto and Winker were being ejected as soon as they walked onto the area by 1st-base umpire Dan Bellino.