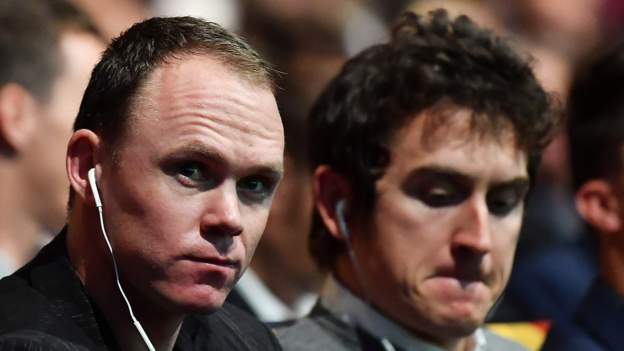 Chris Froome has been left out of Team Ineos’ Tour de France squad.

There had been some doubt four-time winner Froome had the form to make the squad following injuries from a crash a year ago.

Froome, who is leaving Ineos at the end of the current season, will instead lead them at the Vuelta a Espana in October, while Thomas will do so at the Giro d’Italia.

“Chris is a true champion who has demonstrated incredible grit and determination to come back from his crash last year,” added Brailsford.

“We want to support him to compete for another Grand Tour title and the Vuelta gives him that little bit more time to continue his progress to the top level.”

Thomas, 34, will attempt to win his second Grand Tour in Italy, also in October.

“Geraint will target the Giro and take on the opportunity to double up his Tour de France win with another Grand Tour title, with the aim of being the first Welshman to win it,” said Brailsford.

Ineos had the dilemma of deciding who was in the best form of the three Tour-winning riders in their ranks, with Froome in an unusually perilous position, having lost the most time during three crucial warm-up races in July and August – rebuilding as he is, following his recovery from a fractured right femur, a broken hip, a fractured elbow and fractured ribs.

Ineos’ policy is that whoever is the strongest rider going into the final week of any Grand Tour will be backed by the whole team – they had been reluctant to take three riders to the Tour who could all be considered team leaders.

The team will now back 23-year-old Colombian Bernal to lead the team after strong performances in the warm-up races, including victory at the Tour d’Occitanie in July.

However, there are also some doubts over Bernal after he withdrew from the Criterium du Dauphine last Saturday – as a precaution to “rest a bad back,” according to team-mate Thomas.

Thomas, 34, has himself admitted to finding his best form difficult to come by, but has largely finished stages during the recent races ahead of Froome, albeit behind Bernal.

Ineos – formerly Team Sky – have won the Tour de France each year since 2015 and have taken seven of the past eight Tours.

Brailsford added: “Egan will once again target the yellow jersey in France and we are very excited to give last year’s Giro winner, Richard Carapaz, his debut in this year’s Tour also.

“I am very proud that we have several current, and I am sure future, Grand Tour champions in the team.”

Froome leaves Ineos at the end of this year to join the Israel Start-Up Nation, and he will be disappointed at not being able to seek a fifth tour victory – which would equal the record for Tour wins, shared by Jacques Anquetil, Eddy Merckx, Bernard Hinault and Miguel Indurain.

Ineos decided not to renew Froome’s contract, feeling Froome’s camp lacked the grace expected in negotiations, given the support the team had shown him during his rehabilitation following his crash a year ago.

Froome was also believed to have been frustrated with the team for not reprimanding last year’s Tour winner Bernal over comments he made in April. The Colombian told reporters that, if he was in a winning position at this year’s Tour, he would not move over to let Froome lead the team. Insiders felt the quote was fair enough, given the high status of both riders.

Had things been handled differently in recent weeks, Froome could well have seen out his career at Ineos.