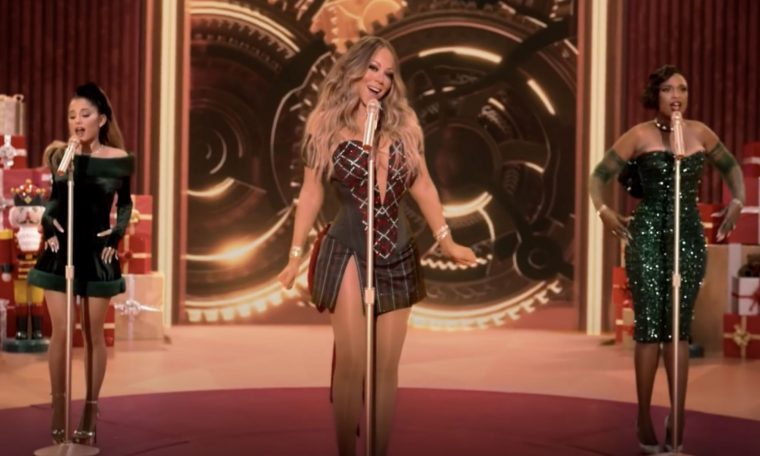 Maria Carey, Jennifer Hudson and Ariana Grande have launched a new version of ‘Oye Santa’ – you can watch the video below.

The collaboration appeared in a new Christmas special show, which airs tomorrow (December 4) on Apple TV. Broadcast on +

The pop star had previously hinted that a collaboration was taking place when he returned in October, and Kerry tweeted a picture of the three directors’ chairs on the set, each with an introductory letter: AG, MC and JH.

You can listen to the track, an updated version of Carrie’s 2010 original, here:

Speaking of cooperation Bill board“I wrote, ‘Oh, Santa!’ For my album ‘My Christmas II You’, which was to follow my first Christmas album – we have many [Laughs] – And so I think it was all about the actual event, of course, ‘Oh Santa!’ To do. With Jennifer and Erie, but it was like this, how do I see this as a producer? ”

Kerry first told the publication: “How do I see these words differently, what are they? Because actually, I was mixing myself, which is one of my favorite things, but it was great to be able to work with different vocal texts and play around with it and re-imagine it.

“It simply came to our notice then. And Darshani, in particular, it really feels like a girl group moment. I think we all had a good time with it. That was the fun part about it. ”

READ  Can Netflix and Win Season 4 Save the Manifest? understand -

In September, Carrie revealed that in 1995 she had secretly recorded an alt-rock album called “Someone’s Ugly Daughter,” which she released under the moniker, Chick.

The singer broke the news On TwitterIn an abstract shared from his memory, Maria Carrie means.

“Fun fact: I made an alternate album while I was making it [1995 album] ‘Daydream’. Just to laugh, but it got me in a few dark days. Here is a short excerpt from what he wrote in #TheMeaningOfMariahCarey.