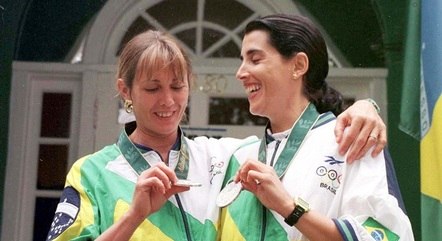 In the time of Hortensia and Paula, the greatest players in the history of Brazilian basketball, the rivalry between the two made fans think every hour, or basket, of one of them better than the other. On brazilian team, Too. The race to see who makes the most baskets? Yes, but feel humbled and proud of your opponent’s victory while passing the ball.

Now they are enjoying this story with a good relationship. interviewed by R7María Paula Gonsalves da Silva, better known as Magic Paula, 59, is proud of this whole trajectory, because it is so remarkable, will be the subject of a feature film. The production was authorized by Ancine in January to raise R$6.9 million and recording work will begin this semester.

“We have been in this project for two years, it is very important for the new generations. And also for the generations that follow our trajectory. It is the story of two women who have evolved, who find themselves as players and the ones with this rivalry. People are changing, which, says Paula, “marked an era of building great things for Brazil.”

Paula believes the work could also be an impetus for Brazil to return to great basketball teams. In Tokyo 2020, it will be the first time since the 1992 Games that the country will have no female and male representatives.

“Recently, we only think about the punctual result, we don’t see what happened in two decades. The problems are not new. The CBB (Brazil Basketball Confederation) spent two cycles with careless management, leading to generations Lost. Playing, you only want results,” says CBB’s current vice president Paula.

For that, a classification and then an Olympic medal requires a long-term project right now.

He said, “We have to immediately think about how to improve and start working on it. If we don’t plan for two, three, Olympic cycles, it will always be like this, if you qualify today, So not tomorrow”, he says.

The former player believes that the Brazilian team needs to bring together a new generation of athletes, both female and male, and maintain the base.

The current context, however, differs from the previous one, when, in glory times, the Brazilian team was marked by great players and players who played together for a long time, such as Paula, Hortensia, Zeneth, Helen, Marcelo, Oscar, Marquinhos, Carioquinha and Edilson. Paula is aware of this, but still believes that the Brazilian team can win again.

“A country of our size doesn’t lack potential. It’s important to have the distinction of playing for Brazil. Currently, in the United States, there are 40 Brazilian players. That’s good for them, they’re learning a new language, Learning about a new culture, good remuneration.From that, you can plan for them to play together for a long time for the national team and also foster new talents, camping, tournaments, with new generations working and not waiting for the results to fall from the sky”, emphasizes Paula.

Talking about her time as a player, she says that the rivalry was really experienced in a productive way, serving as an encouragement and today the two get to learn all from that time. shares.

See also  Along with five Brazilians, Instagram reveals the top-10 athletes with the biggest digital success at the Olympic Games

“Everything was positive in our rivalry. When we discover healthy things to do in competition, and can grow with that, it’s a big win, a privilege,” says the former player.

Paula, who started at Assis Tennis Club, admits that at the time, the competition between the two was very good. For most of his career, he played in different teams, always fighting for the title in the country.

Only in Ponte Preta, in 1994, did Paula and Hortensia get a chance to play together in clubs. And in the Brazilian team, when both combined their own experience and competitiveness for the benefit of the team.

“Not only us, the team won with the rivalry uniting in the national team. One helped the other. It is important that the present generation know this history, so that they always understand how to work together.” And individuality can be accomplished,” she said.

Hortunia will be played by actress Leticia Colin and Paula’s Camilla Mardilla.

The film will address the so-called golden age of two sportspersons between 1989 and 1996. It was a period in which he won the gold medal at the 1991 Pan American Games by defeating a much stronger selection of Cuba. In the middle of the capital Havana. At the awards, an image of Cuban President Fidel Castro, playing alongside two players, was lined up to receive the medal.

In 1994, both won the Worlds in Australia and won the most important title of their career. Two years later, he won a silver medal at the 1996 Atlanta Olympics.

Hortência de Fátima Marcari, now 61, has participated in five World Cups and two Olympics with the national team. In a total of 127 official games, he scored 3,160 points, being the highest scorer in the history of the national team.

Paula is second with 2,537 points. However, he is the athlete who, with 150 official games, played the most for the national team, played two Olympic Games, six World Games, and played for a time in Spain, when he defended Tintoretto between 1989 and 1990.

It is not known who will be visible on the screen for longer. However, this would not be a problem in a plot that would tell the story of a pair, much more than the story of a rivalry.

See 7 stars who will be in Tokyo 2020 Olympic Games