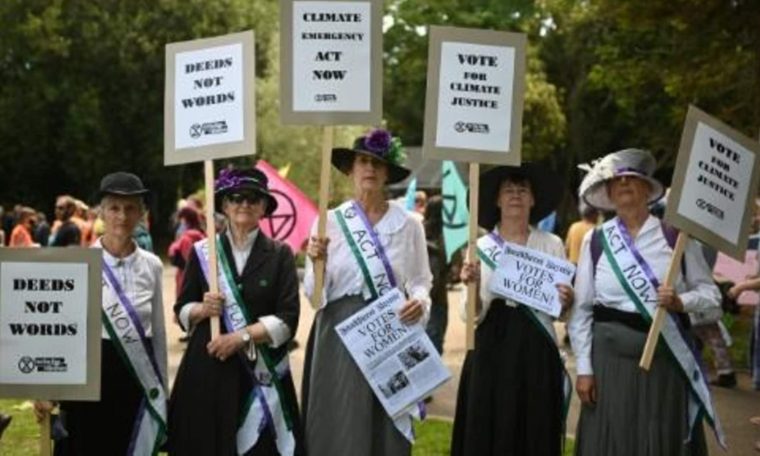 From ocean defense to “clean” recovery, the UK is taking advantage of the G7 summit to mobilize its allies on ecology, in the hope that the months ahead of the COP26 climate summit will make a good impact.

The pandemic as well as the climate emergency are high on the agenda for the superpowers gathered this weekend in bucolic Corbys Bay in south-west England.

At his inauguration, British Prime Minister Boris Johnson reiterated his belief in a “green industrial revolution” to tackle environmental challenges and create jobs in the wake of the health crisis.

The UK, which hosts COP26, the United Nations climate conference in the Scottish city of Glasgow in November, has a lot at stake in terms of politics and image.

“As a historic CO2 emitter and host of these large conferences, the country has an important moral responsibility to take the lead on climate issues,” Greenpeace chief Rebecca Newsom told AFP.

“We need to act or our world leaders will let us down,” he warned.

The NGO made a great video for the occasion, raising 300 drones in the sky to replicate the shape of animals, asking G7 to “act now” on climate and biodiversity.

The summit’s surroundings were also the scene of environmental demonstrations, from Oxfam activists with masks reproducing the faces of leaders who disguised themselves as the famous Pokémon Pikachu to call for Japan to stop using charcoal. said.

“We are hopeful that President Joe Biden has changed the dynamic and we look at ambitious climate goals,” said Max Lawson, an Oxfam activist.

Johnson stressed that G7 countries are committed to halving their carbon emissions by 2030 to limit global warming to 1.5 degrees.

It was already one of the major advances made by the United States during the climate conference hosted by Biden in April, which marked Washington’s return to environmental advocacy.

In Carbys Bay, leaders could adopt a common position on banning new polluting cars, as in the UK, which will implement the measure in 2030.

But despite calls from NGOs to halt extraction projects, they are expected to keep a low profile on fossil fuels.

Johnson is regularly accused of sending mixed signals about the climate crisis, even though the country has set into law its goal of being carbon neutral by 2050.

The leader flew from London to the summit, a journey of less than an hour compared to five hours by train.

Friends of the Earth tweeted, “What impact does this face on climate talks? Lead by example. Take the crisis seriously.”

In addition to climate, the G7 should mention biodiversity, and Johnson wants them to commit to protecting “at least 30%” of land and oceans by this date.

For Ali Tabrizi, director of Seaspiracy, a successful Netflix documentary, moving from promises to action and confronting industrial fishing is essential.

“The oceans, for many years, were neglected as an environmental issue. We have lost 90% of the big fish in the past few decades and many species are on the verge of extinction,” he explained to AFP.

With regard to climate, the central issue to encourage developing countries to do their part remains financing, without which it would be impossible to honor the Paris climate agreements.

The Climate Action Network invites leading countries to advance their contribution to the energy transition.

The G7 is already committed to an infrastructure plan with a climate component.

“Without the announcement of increased funding, the chances of a successful climate talks at COP26 in Glasgow in November are slim,” said NGO head Auror Mathew. In his opinion, “this is a matter of climate justice.”