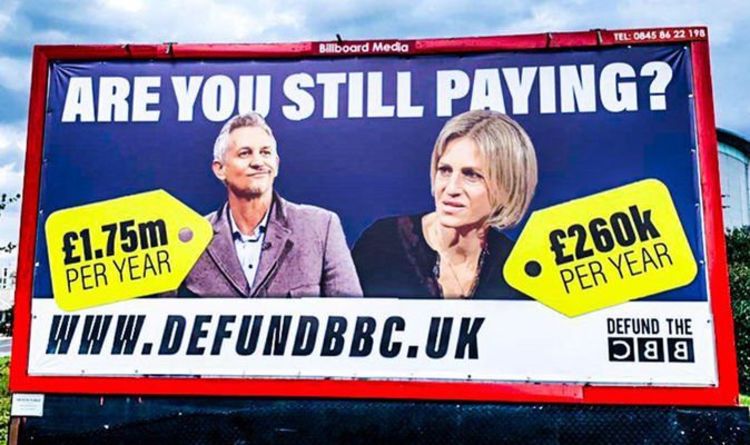 The group, Defund the BBC, argues the corporation is intrinsically politically biased and the public should only have to pay for its content if they want to. The first billboard, situated in south-east London, has already been erected.

It depicts BBC presenters Gary Lineker and Emily Maitlis along with what the group claims is their salaries and the question “Are You Still Paying?”

Defund the BBC is financing the campaign via a Go Fund Me page which has already raised more than £35,000.

It hopes to use this money to finance more billboards across other parts of the UK.

Speaking to Express.co.uk, a spokesman for Defund the BBC said: “The billboard is just the first in a series, we hope, as we appeal for funds via a Go Fund Me page.

“It is pokes fun at the presenters, but also delivers a serious message, that some BBC staff are paid vast sums of cash taken from hard working Brits against their will.

“Anyone who believes the BBC is wrong to effectively impose a tax on the elderly, as they have done recently, or thinks the BBC is not representative of them or the nation should give to our campaign.”

Currently, in order to watch or record live television in the UK, you must pay for a licence which costs £157.50 per household if you have a colour TV.

This money is used to fund the BBC, the world’s oldest national broadcaster, which in return is supposed to provide informative and politically neutral content.

People caught watching TV without a licence can be fined up to £1,000 as well as court costs, and can face prison if they fail to pay.

However Defund the BBC argues the corporation has failed to be consistently politically neutral.

Its spokesman said: “As many Express readers will know, the BBC has long been perceived as biased and anti-Brexit and it is wrong that they threaten Brits with jail for not funding them.

“The BBC should support itself, fairly, through ads or a subscription like other media organisations.

“Disapproval of the BBC is growing and we aim to seize the moment and push for the government to decriminalise non-payment of the licence fee by the end of the year.

“We are also developing informative material so people can legally avoid paying the licence fee.

“Currently, BBC guidelines are deliberately confusing, tricking some people into giving them cash.”

On the Defund the BBC Go Fund Me page supporters of the corporation explained why they had donated money.

One commented: “The BBC is for the few and I’m not included.”

Another added: “The BBC has become an organisation run by a minority who hold in absolute contempt the majority who are forced by law to fund it.”

The BBC argues it continues to provide politically neutral and un-bias coverage.

Shortly after the 2019 General Election Lord Hall, the BBC’s Director General, defended the corporation in an article for the Daily Telegraph.

Boris Johnson has previous said he is “looking at” the future of the licence fee (Image: GETTY)

He wrote: “Around 27 million people in the UK came to the BBC website to find out about the election results.

“It was a reminder of the trust people place in the BBC.

“But the fact criticism came from all sides of the political divide shows to me that we were doing our job without fear or favour.”