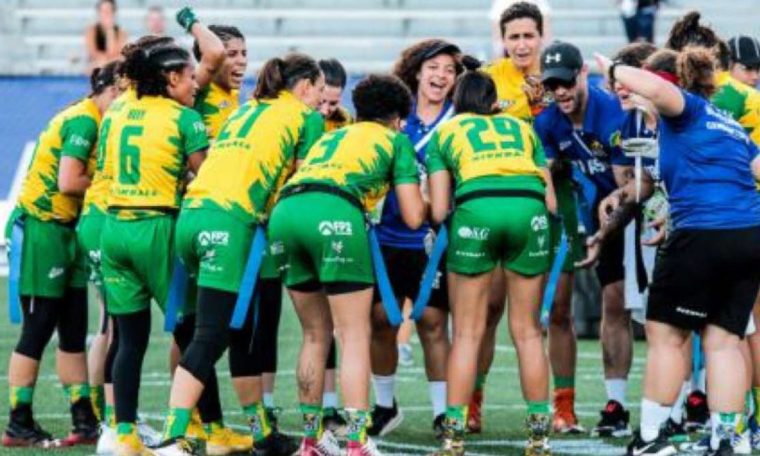 Brazil’s flag football team secured a place in the quarter-finals of the 2022 World Games held in Birmingham, United States. The national team lost three matches in the group stage, but still managed to qualify for the parent competition. In the playoffs, the green and yellow teams will face the United States, this Tuesday (12/7), at 6 pm

The group stage was not easy for the Brazilian athletes. The first match was against Italy last Sunday (10), and Brazil took the lead with a touchdown scored by Lara Torelli. However, the Italians turned the game 12-06 in the first half.

Taissa Alenkar scored the second Brazilian touchdown, and with Luiza Calaca’s conversion, the Brazilian returned to the front of the scoreboard with 13 to 12. Italy scored another TD with converted extra points and came back to lead the game with 19–13. But, Lara Nesralla scored six more runs in favor of the Brazilian team and the game leveled from 19 to 19. However, just before entering the final two minutes of the match, Italy scored more points, a touchdown, and Brazil’s attacking defense . The conquest of the Italians from 25 to 19.

Brazil returned to the field this Monday (11/7) for two more games. The second match was against the Mexican team, the most favored team in Group B. And the opponents lived up to the expectations and made the game 43 to 06. The Brazilian team’s touchdown was scored by Taissa Alenkar.

Closing out the group stage, Brazil faced Japan in another highly disputed game. On debut, the Brazilian went ahead with the score, with a touchdown scored by Taissa Alenkar. The Japanese were tied in the first half, which ended with a score of 06 of 06.

Then, once again, the Asian team took the lead, but Brazil tied with a touchdown from Taisa Alenkar and a valid conversion from Luiza Calaca. Later, Japan took the lead again, but Taisa scored his third TD in the game and the Canarian team changed the game. With the extra points, the green and yellow teams extended the lead on the scoreboard: 20 to 19.

With two last minutes remaining, Japan made another comeback and the game ended 26–20 for the Japanese. Thus, Brazil finished the group stage in fourth place and would face the United States, one of the favorites for the title.

In case of victory, Brazil advances to the semi-finals, which will take place this Wednesday (13/7). If they lose, the green and yellow teams are still in contention for fifth place in the competition and will return to the field on Tuesday night against the losers of Mexico and France.