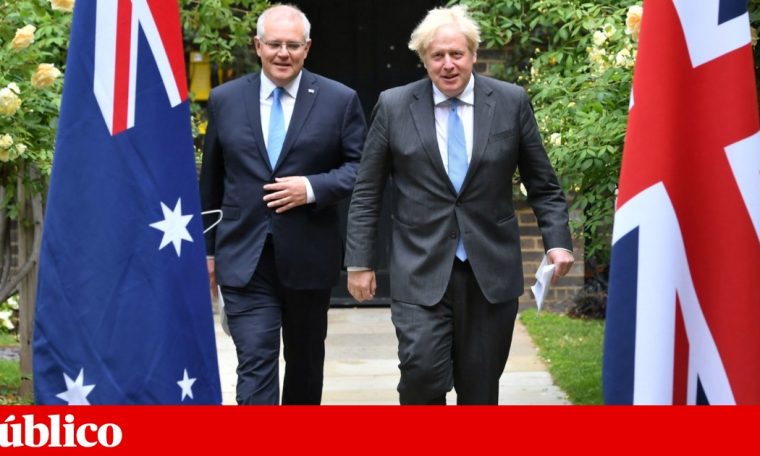 The governments of the United Kingdom and Australia this Tuesday announced a commitment on the general terms of a new free trade agreement between the two countries, the first bilateral agreement since the British left the European Union in January last year.

“Today marks a new era in the relationship between the United Kingdom and Australia based on our shared history and our shared values”, observed Boris Johnson, who accompanied Australian Prime Minister Scott Morrison on the sidelines of the G7 summit in Cornwall. concluded the agreement.

“Our new free trade agreement opens up great opportunities for British businesses and consumers as well as young people looking to work and live on the other side of the world,” the British Prime Minister said.

According to UK government estimates, the free trade agreement will add between 0.01 and 0.02% to the country’s GDP over the next 15 years. According to Downing Street, it will cost between 200 and 500 million pounds (about 232 to 580 million euros) in addition to 2018 prices.

International Trade Minister Liz Truss said: “This is a fundamentally liberalization agreement that eliminates tariffs on all British products, opens up new opportunities for our service providers and makes it easier for our population to travel and work. “

The draft agreement seeks to eliminate tariffs applicable to products traded between the two countries and provide more facilities for tourists and labor mobility for citizens.

However, it recognizes that there is an exception rule of 15 years for some products, mostly agriculture, to help British farmers and producers make a less disruptive transition to the new model.

According to financial TimesThe lack of details on the matter, however, leaves the British farming community very apprehensive. Welsh and British farmers, in particular, fear that the domestic sector will suffer in the absence of applicable tariffs on imports of beef, lamb and sugar from Australia.

In addition, they are concerned about differences in production patterns, particularly the Australian use of certain growth hormones and pesticides banned in the UK.

The BBC notes that the largest amounts of UK exports to Australia include metals, machinery and wine, while imports largely consist of cars, spirits and pharmaceuticals.

The fact that the first “Brexit” free trade agreement announced by the UK – with the exception of the new economic and political partnership agreed with the EU – has symbolic weight with Australia. Since Australia is an ally and historical partner of the British, it is also a region located in a region where the Johnson government wants to stake a large portion of its commercial and economic chips.

with reference to the story Brexit “Global Britain”, which sets the tone for Strategic reorientation of the country for the next decade announced in March“The UK will deepen its involvement in the Indo-Pacific and establish a larger and more persistent presence than any other European country.”