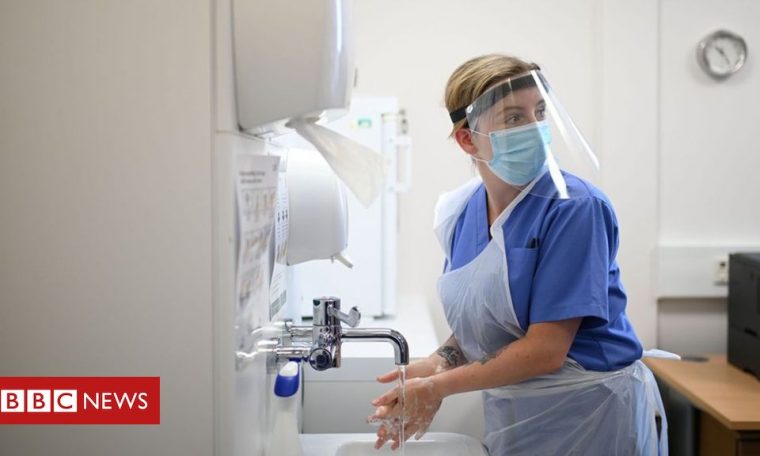 There have been more than 294,000 confirmed cases of coronavirus in the UK and more than 41,000 people have died, government figures show.

However, these numbers only include people who have been tested, and the total number of deaths relating to coronavirus is likely to be higher.

The latest numbers from the Office for National Statistics (ONS), which counts death certificates mentioning the virus, suggests there had been more than 50,000 deaths by 29 May.

When looking at deaths over and above the expected number for this time of year, the toll rises to more than 63,700 by the same date.

Some of these deaths are likely to include people with undiagnosed coronavirus or those who died as an indirect result of the pandemic.

Coronavirus accounted for about 18% of all deaths in the UK in the week to 29 May, according to death registration data – a drop from 21% the previous week.

In the week to 17 April, when deaths from the virus reached their peak, this figure was just under 40%.

Find out how the pandemic has affected your area and how it compares with the national average:

A modern browser with JavaScript and a stable internet connection are required to view this interactive.

Deaths are death registrations where COVID-19 was mentioned on the death certificate. Source: ONS, NRS and NISRA – updated weekly. Although the numbers of deaths per 100,000 people shown in the charts above have not been weighted to account for variations in demography between local authorities, the virus is known to affect disproportionately older people, BAME people, and people from more deprived households or employed in certain occupations.

Cases only include people who have had a positive test for the virus. Not everyone with the virus will have had a test. Source: UK public health bodies – updated daily.

The new coronavirus, which causes the disease Covid-19, was first confirmed in the UK at the end of January, but the number of daily confirmed cases and related deaths only began to increase significantly by the second half of March.

The UK has the highest official death toll in Europe and the third highest in the world, after the US and Brazil. However, the government and many experts say it is too soon to make international comparisons.

On Saturday, the government announced a further 181 deaths.

In Scotland, the official government figure for deaths is 2,447 but data on death registrations from the National Records of Scotland (NRS) suggests it had reached nearly 4,000 by 7 June.

In Wales, the death toll stands at 1,441 while there have been 541 deaths in Northern Ireland.

This week’s figures from the ONS show the overall death total in the UK for the week to 29 May has fallen again, and is now approaching the normal range for the time of year.

The most deprived parts of England and Wales have been hit twice as hard by coronavirus as wealthier areas, according to the ONS. Urban areas were worse-affected than rural areas and London had significantly more deaths from coronavirus per 100,000 people than any other region.

Mortality rates are usually higher in deprived areas, but the virus has increased that effect, the ONS said. See how your local area has been affected and how many deaths involving coronavirus there have been in your neighbourhood.

Research by Public Health England (PHE) has already found that people from ethnic minorities have a much higher risk of dying from coronavirus than people of white British ethnicity. But it is still not clear why – the study did take into account occupations or obesity, which are also known to be high risk factors.

What is the R number in the UK?

The “R number” is the average number of people an infected person will pass the disease on to.

If R is below one, then the number of people contracting the disease will fall; if it is above one, the number will grow.

The Scientific Advisory Group for Emergencies, known as Sage, believes the R number across the whole of the UK is currently between 0.7 and 0.9.

Transport Secretary Grant Shapps described the South West figures as an “outlier of the central estimate” which was below 1.0.

The government has said that the R number is one of the most important factors in deciding when lockdown measures can be eased.

The number of newly confirmed cases each day has been falling since a peak in April, despite an increase in the number of tests being carried out, and the seven-day rolling average shows a clear downward trend.

A further 1,425 cases were announced on Friday.

However, estimates by the ONS suggest there could be nearly 6,000 cases per day in England alone – not including cases in hospitals or care homes – where people either show no symptoms or have mild symptoms and are not tested for the virus.

Chief Scientific Advisor Patrick Vallance has said the epidemic “is shrinking, but not fast,” suggesting this means moving “very carefully” out of lockdown.

Cases were originally concentrated in London, the Midlands and the North West, but Wales and parts of Scotland and the North East of England have also seen a high proportions of cases.

Health Secretary Matt Hancock has raised the possibility that there could be “local lockdowns” in the future to control the spread of the virus.

More than 31,000 people were identified as close contacts of people who tested positive for coronavirus during the first week of the test and trace system in England.

Of those, 85% were reached by the test and trace teams and asked to self-isolate for 14 days.

However, those 31,000 contacts were collected from only two-thirds of the 8,000 people who tested positive for coronavirus.

No contacts were identified from the other 2,710 people with positive tests, either because their own contact details were not correct or they decided not to give out information about who they had spent time with.

The number of people in hospital with Covid-19 has been gradually declining since a peak over Easter.

On Friday, the government said the number of people in hospital with coronavirus had fallen to 5,607- down from 7,036 at the same time last week.

However, the picture is different across the UK’s nations and regions, with numbers falling faster in some areas than others.

The UK exceeded its target to increase testing capacity to 200,000 a day by the end of May.

However, the UK Statistics Authority has criticised how the data has been presented, saying the aim appeared to be to show “the largest possible number of tests, even at the expense of understanding”.

Health Secretary Matt Hancock said he would look at ways the information could be “improved”.

The government announced there were 188,794 tests processed or posted in the 24 hours to 09:00 on Saturday. This figure does not represent the number of people tested, which has consistently been a smaller figure when such data has been available.

At least two million people have been tested for coronavirus – but the government has been unable to provide an updated figure for the number of people for some time.