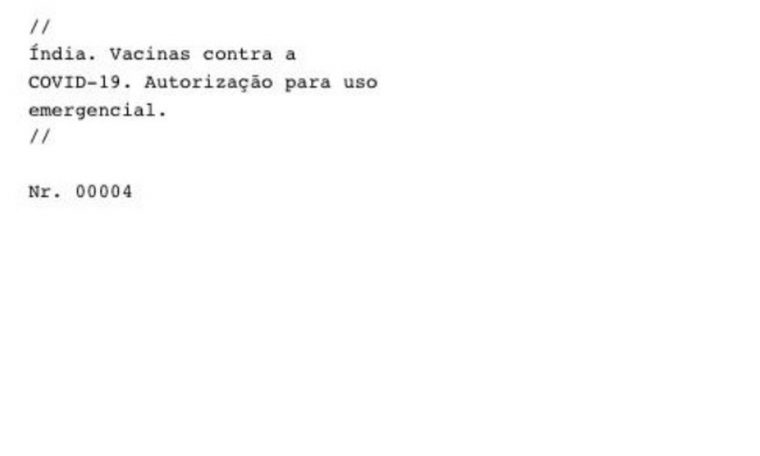 The negotiations related to the import of Covaxin are the subject of investigation by the CPI and the Ministry of Public Affairs.

“The Indian government’s health regulator granted authorization for emergency use of the Oxford/AstraZeneca and Covaxin vaccines on 3 January. Officials start talking about launching a vaccination campaign in the next two weeks. Without full data on vaccines The rapid approval efficacy raises questions from experts,” the Itamarti document states.

In addition, according to this document, produced by the Brazilian embassy in India and passed to the Ministry of Health by Itamarti, Covaxin’s approval in the country must be “restricted use”.

“According to the Indian agency’s press release, the approval of Covaxin is due to public interest with the aim of offering more vaccine options for restricted use ‘in clinical trial mode’, in view of the exceptional situation arising out of the pandemic.” , adds the report.

The CPI will hear this Friday (25th) the health ministry server Luis Ricardo Miranda, who Interview with the newspaper “O Globo” President Jair Bolsonaro has been informed of suspicions related to Covaxin (read details below)

Document sent by Itamarti to the Ministry of Health regarding questions from experts about Covaxin — Photo: Reproduction

The alert was issued on 5 January. In the report, Brazilian diplomats report that the Indian press celebrated emergency approval of the Oxford/AstraZeneca and Covaxin vaccines, “but without approval for both the final efficacy data for the vaccines and the perceived opaque process of deliberation by official bodies.” raised doubts about”.

At the time of approval, the report said, India’s health regulator approved Covaxin on an emergency basis even before the third phase of the trial, which is considered essential for the safety of the immunizing agent.

The diplomat responsible for the document also pointed out that a Bharat Biotech interlocutor acknowledged that the recruitment of volunteers for the third phase was “in progress”.

This month alone, Bharat Biotech reported that it has completed Phase III and said that the effectiveness has reached 77.8%. The laboratory has not yet released clinical studies of this stage of vaccination agent development.

On 25 February, i.e. before the completion of Phase III and even before it received emergency approval by the health regulatory agency in India, the Brazilian government agreed to supply 20 million doses of Covaxin at a cost of $15 to Nesacid and India. Signed a contract with Biotech. per unit.

The agreement provided that the purchase was subject to the approval of Anvisa. On March 29 this year, the Brazilian agency rejected a request for “good practice” by the Bharat Biotech Laboratory. On the last day of the month, Anvisa did not authorize the import of Covaxin. Only on May 14 did the agency release the vaccine, but with restrictions.

According to the health server who will testify this Friday, he refused to sign an import license for about 300,000 doses of the immunizing agent, which would allow an advance payment of US$45 million for the purchase of Covaxin. The payment will be made to a Singapore-based company called Madison Biotech, the contract signed with Nesidaid on behalf of Bharat Biotech.

In the meeting with the president, Bolsonaro would have told the server that he would condemn the pressures to the federal police. However, the government accused the import chief of tampering with documents and announced that he would be investigated along with his brother, federal deputy Luis Claudio Miranda (DEM-DF).

Kovid’s CPI leadership is expected to clarify who is right. The government says the document has been tampered with, and that one that would allow advance payments from Covaxin has been filed in the health ministry’s system.

See also  Coronavirus: College students may well have to remain in 'protective bubble'