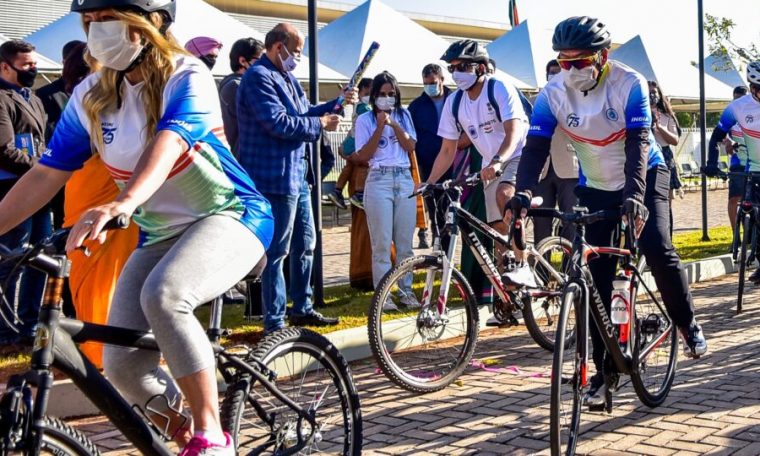 The streets of Brasilia, this Sunday morning (15), as part of celebrations of the 75th anniversary of India’s independence, were taken over by nearly 200 cyclists participating in the India-Brazil Friendship Cycling Circuit. The event began in the Indian Embassy, ​​Southern Embassy area, and ended at the same location, with two routes – 25 km and 75 km.

Lt Governor Paco Brito was received at the event by India’s Ambassador Suresh Reddy and his wife, Ambassador Sneha Reddy, who presented him a T-shirt pointing to the circuit and an Indian book. Paco started two groups of cyclists, in which the ambassador participated; Tourism Secretary, Vanessa Mendonka; members of the diplomatic community; Amateur and professional cyclists, including foreigners, and families with children.

Earlier, participants took part in the solemn moment in the embassy courtyard, with the raising of the flag of India and the national anthem of India, under a “rain” of red flowers. Representing Governor Ibanis Rocha, Paco Brito highlighted the friendship in the relationship between the two countries.

“According to the dictionary, friendship can be defined as a feeling of mutual sympathy. I see this relationship as between India and Brazil, and especially between the Embassy of India and the Federal District Government”, he asserted. Said by giving

In his speech, Paco also spoke about the shared history between India and Brazil. “In general we have, above all, the democratic values ​​that we inculcate in our society”, he said.

“India has a long history. Brazil too. These are important stories about unsung heroes who contributed to the freedom struggle and freedom of the people.

The Ambassador expressed his happiness to be able to greet the people of India on Independence Day, highlighting the history, culture and achievements of the Indian people. “Many known and unknown people sacrificed for freedom with their heroic acts,” he affirmed.

Paco thanked the Ambassador for the invitation, while congratulating the Indian people and their rich culture. In addition, he emphasized the fact that the circuit would highlight tourism in the federal capital. “The India-Brazil Friendship cycling circuit is a milestone in our capital and I am very proud to be a part of it. This opportunity will showcase the natural beauty of Brasilia and all the tourist possibilities it has to offer”, he concluded.

Chilean cyclist duo Iorge Flores, 47, and Lucia Larea, who competed in the 25km route, agreed with Paco. Practicing the sport on weekends, the couple moved to Brasilia in January of this year and were happy with the city. “We love Brasilia. Today is a great opportunity to learn and share [os pontos turísticos com os visitantes]”, Chile said in “Portunhol”, after receiving “good luck” from the lieutenant governor.

On the 75km route, there was a 42-year-old Brasil amateur cyclist, Elomer Antonio Alves, who is already used to morning training with the Ciclomaniacos 10 group in the Parque da Cidade. “But this is the first memorial event I have attended. It is very nice and well organized”, he said after taking pictures with officials and Indian families present.

The routes of cyclists, who received a similar kit to participate in the circuit, were supported by the Federal District Government (GDF) through the Department of Traffic (Detran/DF); Military Police (PMDF); As well as members of the brigade and a private security company, which works to cover physical and material damage. 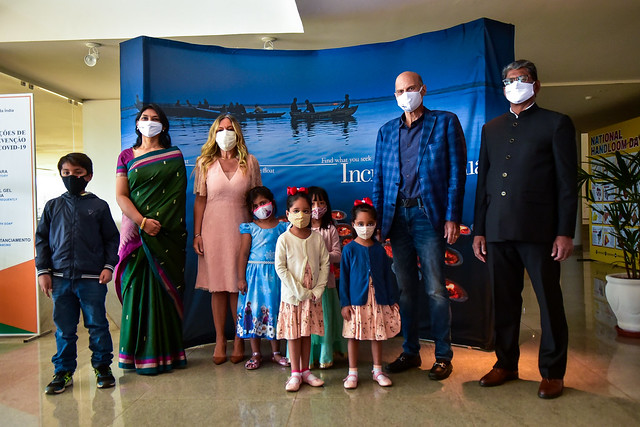