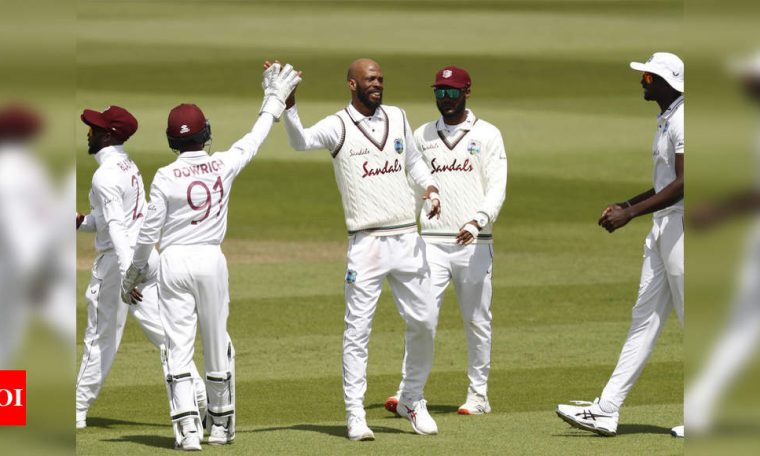 LIVE SCORECARD
That’s LUNCH on Day 4 at the Ageas Bowl. ENGLAND 79/1, trail by 35 runs.
Openers Rory Burns and Dom Sibley slowly brought England back into the first Test as the hosts reached 79 for 1 at lunch on Day 4 to reduce West Indies’ overall lead to 35 runs. Burns was the only dismissal in the morning session on Saturday, caught by John Campbell at backward point off Roston Chase for a 104-ball 42. Sibley is 31 not out, and Joe Denly is on 1. England had resumed their second innings on 15 for 0 at the empty Ageas Bowl in reply to West Indies’ first-innings total of 318. Progress was slow in the morning with at one point only three runs off nine overs, and 64 runs from 30 overs overall in the session.
England scored 204 in their first innings of the rain-affected Test.

LUNCHWest Indies have conceded just 17 runs in 16 overs since drinks, as well as picking up the wicket of Burns 🌴… https://t.co/jvRlXysQGv

OVERS 32.6: FOUR! Sibley leans forward and drives Chase beautifully towards deep mid wicket for a boundary. ENGLAND 69/0, trail by 45 runs.
OVERS 29.1: OUCH! The balls hits Sibley’s right elbow. No chance in the pace from Jason Holder. The ball hits the surface, bounces sharply and hits Sibley’s right elbow. He is alright and resumes batting. ENGLAND 64/0, trail by 50 runs.
The partnership between Burns and Sibley is now 63 runs. West Indies are desperately looking for a wicket.

Burns and Sibley continue to grow their partnership 🏴󠁧󠁢󠁥󠁮󠁧󠁿 Who should Jason Holder turn to in order to break thi… https://t.co/dubRrC1EMX

It’s time for DRINKS at the Ageas Bowl.
OVERS 21.3: Sibley sends Holder for a boundary towards deep square boundary. ENGLAND 57/0, trail by 57 runs.
50-run partnership comes up between Burns and Sibley.

Burns and Sibley have brought up their third 5️⃣0️⃣ partnership in Tests 👏 Can they make it their first century p… https://t.co/9enaL1KaqB

OVERS 19.2: FOUR! Loose and too wide from Holder. Burns smashes the ball behind square.
OVERS 18.4: Rory Burns cuts the ball towards deep backward point. He takes 3 runs. ENGLAND 47/0, trail by 67 runs
West Indies bring spin into the attack. Holder give the ball to Roston Chase. Can he get the breakthrough?

Burns and Sibley are off to a steady start in the sunshine this morning ☀️ They both pick up boundaries off Shann… https://t.co/x9iZBqej0r

OVERS 16.4: FOUR! A soft push from Burns towards mid on. Roach isn’t happy with this. Runs are flowing for the Three Lions. ENGLAND 40/0, trail by 74 runs.
OVERS 15.4: FOUR! A juicy half volley from Gabriel. Sibley flicks the ball nicely towards deep square leg. ENGLAND 34/0, trail by 80 runs.
OVERS 15.2: FOUR! Brilliant shot from Burns. The left-hander drives Gabriel beautifully towards sweeper cover for a boundary. ENGLAND 30/0, trail by 84 runs.
Captain Jason Holder is having a word with Shannon Gabriel. Game plan?
OVERS 12.5: Burns shuffles across the fine leg region. He takes one run and runs for a second one too. Brilliant running between the wickets by Burns and Sibley. ENGLAND 22/0, trail by 92 runs.
OVERS 12.2: Sibley plays this beautifully towards square leg. He will get 2 runs.
Who will take the first breakthrough on Day 4?
Shannon Gabriel
Jason Holder
Kemar Roach
Others?

Which player has impressed you the most so far in the first #ENGvWI Test? https://t.co/PiXDtcHVlN

England openers Dom Sibley and Rory Burns are at the crease. Kemar Roach to start the proceedings on Day 4. Here we go…

James Anderson feels the wicket in Southampton will keep low and hopes that it will deteriorate on the final day to… https://t.co/Kl1ec1N01b

Hello and welcome to TimesofIndia.com’s live coverage of Day 4 of the first Test between hosts England and West Indies at the Ageas Bowl in Southampton.
Match so far..
Riding on gritty performances from Shane Dowrich (61) and opener Kraigg Brathwaite (65), West Indies, on Day 3 ended their first innings at 318, taking a solid 114-run lead.
England were at 15 without any loss at stumps, surviving a tricky 10-over period with Dom Sibley (5*) and Rory Burns (10*) at the crease.
But still trailing by another 99 runs, England find themselves in a bit of trouble against the Windies bowlers, who are in top form.
A relatively weak England top order (in absence of Joe Root) will look to fire or at the least see off the tricky morning session with conditions still in favour of the bowlers.
West Indies, on the other hand will rely on first innings’ hero Jason Holder and other pacers and aim for early wickets to strengthen their grip on the match.

See also  The image of the Chanel solar panel was taken in India, not Brazil.