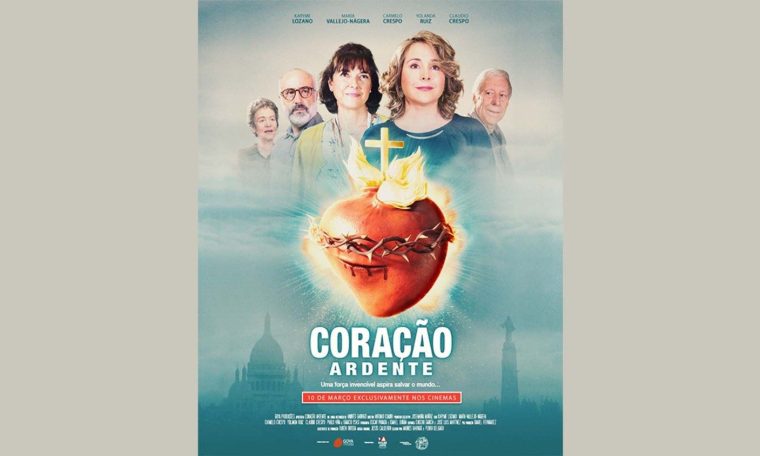 Made in Spain, Burning Heart won the top prize at the Polish Catholic Film Festival and has been screened in nearly 20 countries.

Devotion to the Sacred Heart of Jesus is featured in the film Coracao Ardente, which is set to be released in Brazilian cinemas next Thursday, March 10. So far, more than 40 cities in the country are on the exhibition circuit of the Spanish feature, directed by Antonio Quadri and Goya Produce founder Andrés Garrigo.

Burning Heart tells the story of Lupe Valdez (Karim Lozano), a successful writer looking for inspiration for her new book. Along the way, she meets journalist Maria (Maria Vallejo-Najera), who suggests she investigate a series of miracles associated with Jesus’ devotion to the Sacred Heart. Committed to this research, Lupe is inspired to think about her faith, her values, and discover the importance of forgiveness.

In addition to this drama, the film takes viewers to deepen their knowledge of the origins of this popular religiosity and its importance to Catholicism over the years and to the present day.

The Coração Ardente has already been shown in about 20 countries and continues to be shown in the United States, Mexico and Uruguay. In Brazil, the production is supported by the National Director Apostolate of Prayer, Fr. Eliomer Ribeiro. For the Jesuits, the film’s arrival has been long awaited by members of the movement, which reaches 2 million congregations in the country.

“This production takes us deep into the spirituality of the heart of Jesus, which is to make our hearts like Him. It is a beautiful film, worth watching and spreading”, says Fr. Eliomer.

Burning Heart won the top prize at the 2020 Catholic Film Festival in Poland. On this occasion, the jury deemed that the film “reveals to today’s world that the cult of the Sacred Heart of Jesus not only belongs to history, but it continues to be a great hope for the contemporary man”.

See also  Brazil outside the Oscars 2021: See Latin films that are in competition

Gathering moving testimony, Burning Heart reveals the scope of Jesus’ devotion to the Sacred Heart. Alicia Beauvais, an evangelist of this religiosity in Latin America, claims she has lived a “precious experience” that changed her life: “He who truly finds the heart of Jesus can never be the same again”.

Special preview sessions took place in February in some Brazilian cities. Naira and Olivia could not hide their feelings with tears in their eyes as they left the room in Rio de Janeiro. Naira testified that she felt “God’s manifestation in all forms: forgiveness, love and faith”.

Caterina Spila visited the exhibition in So Paulo. With his grandchildren, he spoke of his joy at being able to take them to the cinema to see a film that reproduced Christian values.

“It was a great feeling to be able to bring my two grandchildren. It’s hard to bring young people to see a film of this genre and they are here with me. I think God touched the hearts of them and all of us.” I am very grateful for the opportunity”, said the active lady of the Archdiocese of So Paulo and who has shared this facility with her friends, family and community.

A group of priests and young seminarians from the Servos de Jesus Salvador Missionary Institute (Salvistas) took part in the preview. For Father Mariano Rodrigo, the arrival of the film is a great blessing for the whole of Brazil and an opportunity to “grow in this new promotion to reach the many thirsty and even despondent hearts”.

Coracao Ardente is rocked by the song “El cielo para ti”, recorded by the Argentine singer Athens, whose Portuguese version, “O seu para ti”, is performed by Andrea Zanardi (Lord of the Singers).

“From the beginning, I talk about my pleasure, the honor of being a part of this project and being part of another evangelical project. Film, cinema is something new for Catholics and it is another form of propaganda. Therefore, that We can expand it, move it”, the singer recommended.

Invited to the preview session, Andrea spoke about the experience of recording the theme song for the film Coracao Ardente: “I enjoyed the Portuguese version and interpretation. I had many experiences with the Sacred Heart of Jesus and it started with me. Hua mother, through the girls of the apostates of prayer. And in this moment of pestilence, the fourth promise of the Sacred Heart of Jesus touches me very strongly: “I will comfort you in all troubles”. Song ‘O seu para ti’ speaks of exactly this: that we may rest in the heavens which is the heart of the Lord”.

The film Burning Heart, remembering the significant figure of Saint Margaret Mary Alcock, chronicles the dedication of Jesus to the Sacred Heart, to whom, according to church tradition, Jesus desired a party in honor of His Sacred Heart. Was. ,

However, before and after these revelations – which took place between 1673 and 1675 – mystics, theologians, popes and saints, inspired by the Gospel of John, reflected the mystery, contributing to the strengthening of this popular religiosity spread over the centuries. .

Saint John Eudes was a great preacher of devotion in the 17th century. He wrote the first religious service in honor of the heart of Jesus. In one of his reflections he said: “Give yourself to Jesus to enter into the vastness of His great heart, which contains the heart of His Holy Mother and all the saints, and lose yourself in that abyss of love, charity, mercy. Give me humility, purity, patience, submission and purity.”

Saint Gertrude was one of the first devotees of the Sacred Heart and offered a prayer to him: “I salute you, O Sacred Heart of Jesus, the living and life-giving source of eternal life, the infinite treasure of divinity, the burning furnace Lord love of…”

On a visit to Poland in 1999, Saint John Paul II reflected in this way: Everything that God wanted us to say about himself and his love, he placed in the heart of Jesus, and through this heart he expressed it . We are facing an incomprehensible mystery. Through the heart of Jesus we read the eternal divine plan of salvation for the world. And it’s a love project.”

Pope Francis has also expressed himself on several occasions about the love that emanates from the heart of Jesus: “The holy heart is a symbol of passion: it shows us the tenderness of God’s visceral, his loving passion for us as well as , under the weight of the cross and surrounded by thorns, it shows us how much our salvation is worth. In tenderness and pain, this heart reveals, in essence, what is the passion of God: man”, he Said on one of these occasions.

Opportunity to get into spirituality

The film Burning Heart brings a reflection of faith and hope, affecting individually, but collectively, being an excellent opportunity for spiritual depth among church groups and movements.

Learn more about the Burning Heart movie via the following channels: