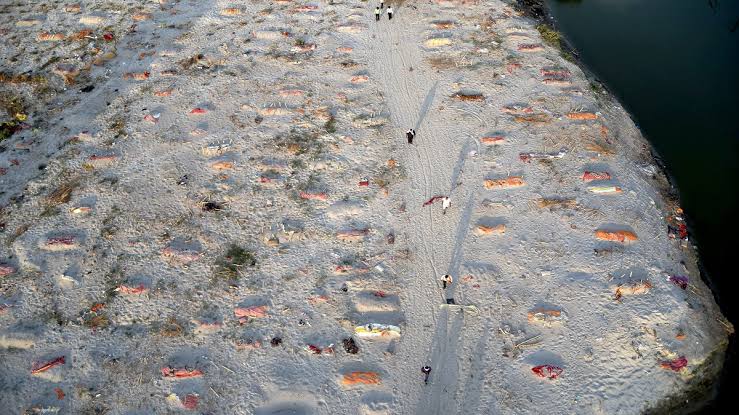 The rise in the water level of river Ganga has eroded the thin layer of soil where Covid-19 victims or suspects of infection were buried in India. The bodies were found wrapped in cloth near the Phaphamau Bridge near a cremation site in Allahabad, Uttar Pradesh state. information is from AFP.

At the worst moment of the second wave of Covid-19 in the country, cemeteries and crematoriums were overwhelmed by the influx of daily deaths. Due to lack of space or resources, many families had to bury their loved ones in the waters of the Ganges. Others opted to bury them in makeshift pits along the river.

The arrival of monsoon coupled with torrential rains caused floods and uprooted bodies buried on the shore. According to Allahabad officials, around 150 people have come forward and set ablaze in the last 3 weeks.

Characterized by the height of the second wave, funeral pyres are multiplying on the riverbank, where more bodies are expected to come for cremation. According to city officials, 600 bodies were buried in this area.

“There is a risk of getting dangerous diseases from this condition. government should investigate Deepin Kumar, who lives near the Ganges in Allahabad, said.

Banker Sonu Chandel, who works at a riverside crematorium, said he remembers burial scenes that shook him and said he was worried about the rising waters.

“It was very sad to see people burying their loved ones like this and the floods made the situation worse.“, he told. “I am always afraid that someone (a body) will hit my paddle or that (my boat) will run over a corpse when it rises above the water.”, he concluded.

Lakhs of Hindus traditionally come to bathe in the Ganges and wash away their sins or perform last rites, resulting in cremation of the dead on its banks and then their ashes scattered in the water. Residents of other important religious sites in northern India fear that the prolonged presence of dead bodies will further infect the river, which is the most polluted river in the world.

Police and rescue teams are patrolling the coast in search of bodies. Two boats carry out the task and sometimes take the help of local fishermen. “the flow is too fast”, said a policeman. “At present the challenge is to remove the dead bodies.“.

The number of daily coronavirus infections in India fell below 40,000 for the first time in 3 months. The curve of recorded cases and deaths, with 37,500 new cases and 907 deaths in the last 24 hours, is in stark contrast to the corpses floating in the holy river.