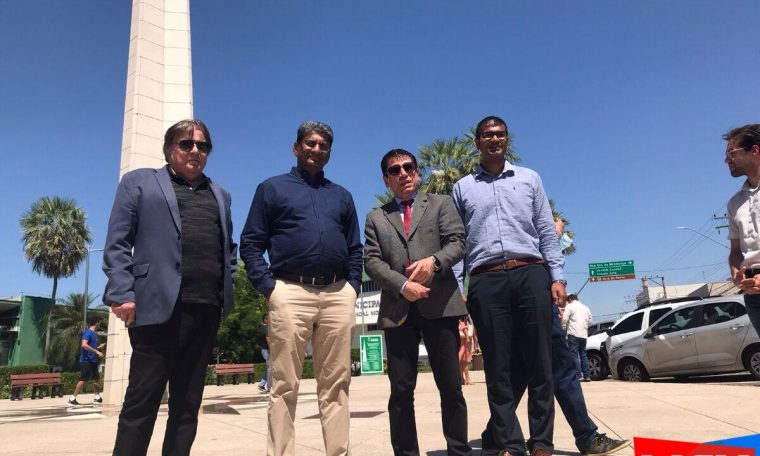 The Municipal Secretary of Culture, Sports and Leisure, Aluizio Leite Paredes, on Tuesday (19.04) presented the project to build a theme park in the capital to Suresh Reddy, the Indian Ambassador to Brazil. The proposal for the new vacation spot should benefit approximately 100,000 people living in the south region (Real Park, Santa Terezinha, Parque Cuiba, residential Jardim Paulista, among others).

The park project consists of a walking track, playground, pet space and outdoor gym, parking, galleries with an exhibition about Gandhi and the culture of India, gastronomic square and skate park.

“We are going to build a large park behind the Real Park within the urban periphery of Cuaba, where India will be a major partner of the Municipality of Cuaba. The project has already started with the visit of the Ambassador of India. Viewed the project as interesting and in this partnership we are going to strengthen a large park in Cuaba”, announced the secretary.

During his visit to Cuiabá, the Indian Ambassador to Brazil, Suresh Reddy, was also accompanied by a cultural presentation by the Cuiaban group Flor Ribeirinha. “We are receiving the Ambassador of India, we are here at an extensive event of the Municipality of Cuiaba. We had a cultural performance by Flor de Riberinha. We were welcoming him at the airport and we were visiting the tourist attractions of Cuiaba. Will visit and take them to see Chapada dos Guimaraes.”

Read also: Party material will not be used on Bolsonaro’s motorcycle: “Left condemnation”

See also  Where to Play Keno in Massachusetts

There is still no investment estimate for the construction of the park.

Project Created by the Secretary for Environment and Urban Development, the project aims to build sculptures that will tell history, in a large green area, with a statue in the center of a lake, a gallery for information and a permanent exhibition about Mahatma Gandhi India, a special place for meditation and yoga.

There will be 10 hectares of leisure and living area with all structure for the practice of physical activity and recreation for the local population.