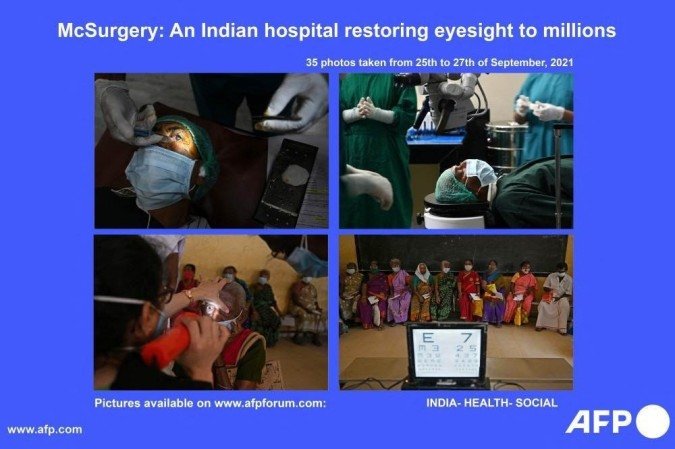 A new model of cataract surgery in India has helped millions of patients regain their vision, with dozens of patients with black dots on their faces indicating they are operating on profit.

Using a system similar to McDonald’s fast food chain assembly lines, Arvind Ophthalmology Group conducts about 500,000 operations a year, many of which are free of charge.

According to a World Report on Vision by the World Health Organization (WHO), more than a quarter of the world’s population, about 2.2 billion people, suffer from visual impairment and 1 billion of these cases are preventable or left untreated. Is. .

There are about 10 million blind people in India and another 50 million with some form of visual impairment, with cataract (clouding of the lens) being the main cause.

Tulsiraj Ravila, one of the founders of Aravind says, “Most of these cases of blindness are preventable as they are largely due to cataracts, which can be easily treated.”

The Arvind Hospital was created by Dr. Govindappa Venkataswamy, who was inspired by Roy Kroc, former McDonald’s president, and learned about the fast food giant’s economy of scale.

“If McDonald’s can do it with hamburgers, why can’t we do it for eye care?” he asked himself.

Aravind started with 11 beds in Madurai, the southern state of Tamil Nadu in 1976, but expanded to medical centers and community clinics across India.

The model was so successful that it was the subject of several studies, including one by Harvard Business School.

His ability to meet patients is central to his work, in a country where 70% of the population lives in rural areas.

“Access is the main concern, so we are bringing people treatment instead of waiting for them to come to us,” Ravila tells AFP.

Free treatment is a blessing for people like Venkatachalam Rajaangam, who got treatment close to home.

Rajaangam says he stopped working because he could not see the money paid by customers at his store and was stuck on stairs or when he went out at night.

The 64-year-old man came to know about a clinic near his village in Kadukarai, 240 km from Madurai, where doctors examined his eyes and detected cataract in his left eye.

Rajaangam was taken by bus along with 100 other patients to a hospital accommodation, which also provides food and mats, and underwent cataract removal procedure.

“I thought the operation would take an hour, but it was finished in 15 minutes… the procedure was done correctly,” Rajangman said when the blindfold was removed.

“It cost me nothing (…) God made my eyes, but he was the one who restored my sight,” remarked the man gratefully.

Surgeon Aruna Pai explained that doctors get rigorous training to ensure that they can operate quickly. According to the hospital, Arvind’s complication rate is less than two in 10,000 cases, which is lower than in the UK or the US.

“We have labs where we learn to work with a goat’s eye. This helps us hone our skills,” said Pai, who performed 100 surgeries a day.

On a financial level, Arvind uses the proceeds from the wealthiest patients to pay for the treatment of the most disadvantaged, rather than relying on donations or government grants.