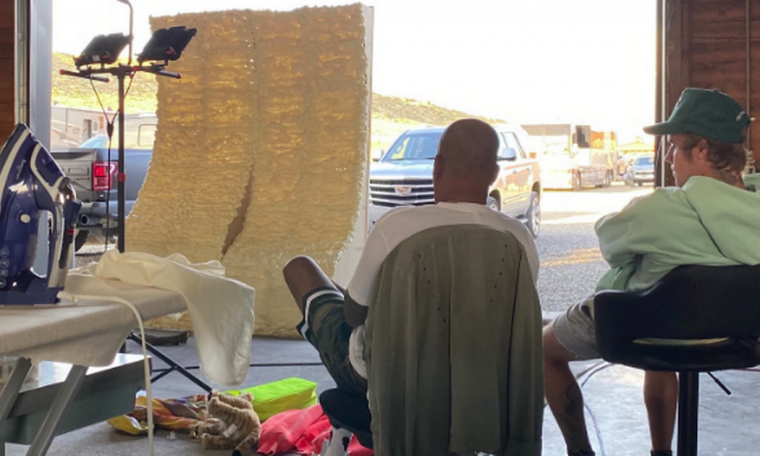 Justin Bieber joined Kanye West at his ranch in Wyoming on Friday amid claims the rap star is desperate to divorce wife Kim Kardashian.

Company singer Justin pulled up a chair to help Kanye with his ongoing plans to convert his Wyoming ranch into a design studio campus for his fashion line.

Taking to Twitter on Friday, Kanye shared a snap of the younger musician kicking back in a chair while reviewing a prototype wall.

Kanye discussed his plans to transform his 4,500 acre ranch into a hive of creativity earlier this year.

He told GQ magazine: “This will be one of the Yeezy campuses and the Yeezy Campus will have the work that our architectural team has been working on….to create spaces to allow humans to maximize our potential, to take us out of the box.

“Literally and figuratively, we live in boxes. We leave the womb when we are born and get put directly into the tomb.

“We get put directly into our first square space which is the beginning of us going from being multi-dimensional and completely imaginative to placed onto a grid.”

“Those boxes are those grids. First it starts off with the crib, then we go to schools where that’s a box, then we go to higher learning a lot of times and that’s a box and then we end up at a job where we are working inside of a box and we do that to try to buy a crib, actually, and then we, you know, have children and put our children in a crib.”

Justin and Kanye have been unlikely friends for years – with the pair having a bond over a shared dislike for singer Taylor Swift and also on a spiritual level.

In February, Justin joined Kanye at his Sunday Service religious ceremony where he performed for the gathered audience.

The Canadian star’s arrival at the ranch comes at a time when Kanye is said to be ignoring wife Kim, 39.

The rap star made claims in tweets earlier in the week that he has been planning to divorce the reality star, while also sharing fears his wife’s family are trying to fly doctors to his ranch to “lock him up”.

His tweets have sparked concern among fans – while wife Kim has expressed her own concerns that Kanye has been suffering from an episode related to bi-polar disorder.

Friends have rallied around Kanye in recent weeks after he showed signs of struggling with his mental health.

Comedian Dave Chappelle has also joined the music star at his ranch – with the musician branding him a “god send and a true friend” after he arrived to visit on Tuesday.

See also  At what time does Netflix update new movies and series? | Apps