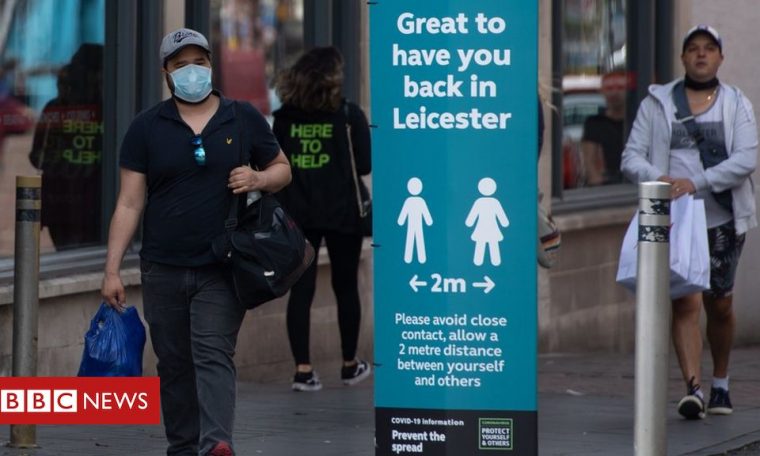 Pubs and restaurants in Leicester may stay closed for two more weeks due to a surge in coronavirus cases, the city’s mayor has said.

Sir Peter Soulsby said the government had recommended current restrictions are maintained for a further fortnight.

He told the Today programme the city could “remain restricted for two weeks longer than the rest of the country”.

The prime minister said Public Health England and local authorities had the power to bring in a local lockdown.

Coronavirus restrictions across England are due to be eased from 4 July, with pubs, restaurants, hairdressers and hotels allowed to reopen.

But Sir Peter said he had received an email from the government overnight and “it seems they’re suggesting we continue the present level of restriction for a further two weeks beyond 4 July”.

Sir Peter criticised the analysis as “superficial” and said he did not know whether the government had the power to impose an extension if council officials concluded it was not necessary.

“I think it’s very unclear as to what difference it would make if they continue the regulations in Leicester and why you would do it,” he said.

“Frankly, if the virus is out of control and spreading in Leicester with the restrictions, I can’t understand how extending them for a further two weeks would make any difference to that.”

Local leaders are due to discuss the situation with Health Secretary Matt Hancock later before he addresses the House of Commons.

Boris Johnson said a local “whack-a-mole” strategy used to deal with outbreaks in Weston-super-Mare and around GP surgeries in London would be “brought to bear in Leicester as well”.

We should get used to these local flare-ups – they are going to become a way of life over the coming months.

The virus, while at low levels, is still here.

There are around 1,000 positive tests every day across the UK on average – and then there are the unknown number of silent spreaders, those who do not show symptoms and hence do not get tested.

What’s important is that these clusters are brought under control quickly and don’t spread.

The fact a local outbreak has been identified in one part of Leicester suggests the system is working to some extent – although it’s fair to ask whether it could have been spotted more quickly given cases have been growing for a number of weeks.

With extra testing facilities parachuted in officials will be desperately trying to get a clear idea of just how far it has spread so delaying the further easing of restrictions is the logical step.

If more cases keep emerging a local lockdown will be on the cards.

Should it be like this? Some argue we should have suppressed the virus further before easing – essentially going for elimination like New Zealand.

But for a country like the UK where the virus had spread further before lockdown and with its size of population and packed cities that is somewhat harder.

Business owners in the city who had been preparing to reopen on 4 July said they were dismayed at the prospect of having to wait a further two weeks.

Restaurant owner Sohail Ali said the uncertainty had made him “very nervous”.

“Everyone has got bills to pay, mouths to feed, so we need to make sure that we can get our businesses back open,” he said.

Blake Edwards, owner of the Flappers and Gentlemen salon, said continuing restrictions would be “heartbreaking”.

Lyndsey Portas, who owns a fruit and veg stall at the city market, said she “can’t believe” Leicester is “worse than more heavily populated cities”.

“It would have been nice to have felt it was a bit back to normal, but if it’s spreading through the community, it does need to be stopped.”

Jo Collins, who works in a city centre pub, wants to get back to work to provide for her children.

The 30-year-old said: “I’ve got kids and I was off sick before this started for three months so I couldn’t get furlough, so I’ve been on universal credit instead.

“It’s unfair on Leicester and I’d be gutted if this carries on. We can definitely open safely.”

Ivan Browne, Leicester’s director of public health, said local cases were “very much around the younger working-age population and predominately towards the east part of our city” and “likely [due to] a combination of factors”.

About 28% of Leicester’s population is of Indian heritage, and a further 21% are from black or Asian backgrounds.

What the data does and doesn’t tell us

The figure for confirmed cases in Leicester is almost three times that published by the government.

This is because the government’s published data for local cases only cover tests carried out in hospitals and for health workers – known as Pillar 1.

Tests outside of hospitals, known as Pillar 2, are not broken down by local authority but PHE has started publishing a weekly round-up by region.

PHE does not provide figures down to a local authority area, but a map in its report showed Barnsley, Bradford and Rochdale all recorded at least 45 new cases per 100,000 people in the week ending 21 June.

In its weekly report PHE said case detections were highest in the north of England and there had been increases outside of hospital testing in Yorkshire and the Humber over the previous two weeks.

“At a local authority level, activity was highest in parts of West Yorkshire, Greater Manchester and in Leicester,” it added.

Dr Manish Pareek, a consultant at Leicester Royal Infirmary, said recent cases of Covid-19 he had seen were from “inner-city areas which have high levels of ethnic diversity, pockets of deprivation but also quite crowded housing with inter-generational and multi-occupancy households”.

These factors “are almost like a perfect storm for a virus to be spread within,” he added.

The Department of Health and Social Care said it was working with PHE, the city council and local partners “to help prevent further transmission of the virus”.

Four mobile testing sites and thousands of home testing kits have been sent to Leicester, a spokesperson added.

Do you live in Leicester? What do you think about a local lockdown extension? Share your experiences by emailing [email protected].

Please include a contact number if you are willing to speak to a BBC journalist.