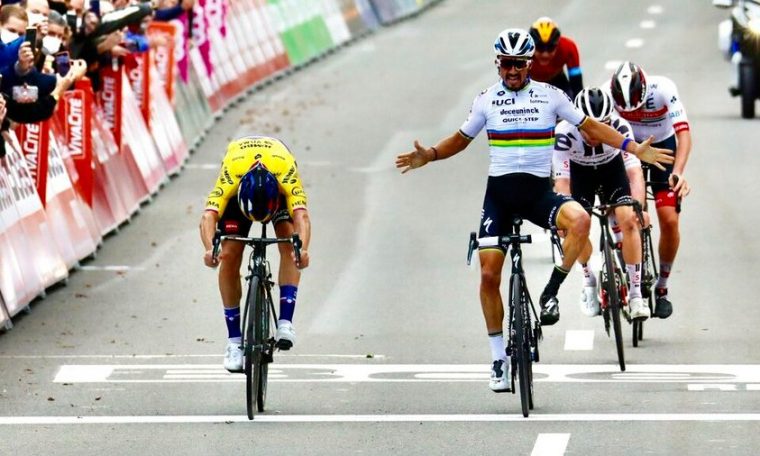 Primrose Roglik won a dramatic victory at the Liege-Bastogen-Liege after an early celebration of overnight crowning world champion Julian Alafilipp.

Roglik and Alafilipp were in the final group, with Tour de France winner Tadej Pogacar and in-form Marc Hirsch after 257km.

Alaflipe of France opened his sprint first, leaving a small gap between the other groups.

As the final line approached, Alapilip dangerously moved to his left, upsetting Hirchi and Pogakar.

The thought of victory was his, Alaphilip threw his hands in the air, but was put on the line by Roglik, who maintained his sprint on the right side of the road.

See the last few hundred meters of the ODI classic below.

It was a reward for Roglik, who was hard-pressed to claim his first Tour de France before Pogkar was blown up during a final hearing last month.

“I am very happy and very proud of the team. In the end, I managed to win something.

“The team did a great job, they kept me safe at all times. I’m really glad I managed to win.

Alafilipp, who won last week’s World Championships, was relegated to fifth place in the group after Hirsch was interrupted in the sprint.

Hershey was promoted from third to second, while Pogacar was third.

After the race, Alaphilip admitted his mistakes and apologized for his dangerous move in the sprint.

“I’m clearly disappointed not to have won,” he said.

“With a cold head, after recovering a bit, I saw the footage and I didn’t really realize I had made such a serious mistake. This was the first mistake.

“The second mistake was to pick up the weapons a little early. This is the first time in my career that has happened, and I think it will be the last.

“I prefer to go back to second place, rather than if I win.

“I apologize for what happened to Hirchi, and thank my team for their work today. I’m still happy to show off the jersey in this race, and I gave my all, but nowhere near as sorry, and disappointed. “

Australia’s Richie Porte Roglic and co. 14th in the second group on the road 14 seconds behind.