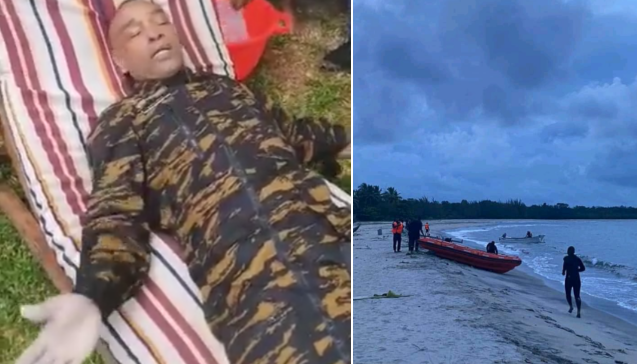 “It’s not yet my time to die,” Serge Gail announced in a video posted on social media, in which he is seen lying in a lounge chair, exhausted.

or normal Serge GeleState Police Secretary madagascar, was one of the survivors of a helicopter crash off the northeast coast of the large African island. To do so, the minister had to swim for about 12 hours to reach land, Malagasy officials reported. According to the head of the country’s port authority, Jean Edmond Randianantena, he and a colleague of one of the institutions arrived ashore after jumping off the plane on the afternoon of Tuesday, 21. In a video posted to the social network, Gayle, 57, appears to be exhausted as he lies in a lounge chair, still wearing his camouflage uniform. “The time has not come for me to die yet”, the general announced, adding that he was feeling cold but was not hurt. Gayle became a minister last August as part of a cabinet reshuffle after three decades of police service. The helicopter was carrying him along with other officials to inspect the site where a shipwreck occurred on Monday off the north-east coast of the island country. At least 21 people died and 60 others were declared missing in the disaster this Tuesday, according to the latest official balance.

GDI Serge Gele, who was one of the passengers on board the helicopter that crashed yesterday, was found safe and sound near Mahmbo this morning.
️ #4° The rescue team of the UPC also found the wreckage of the helicopter on the bottom of the sea. pic.twitter.com/sP2abwTMwB