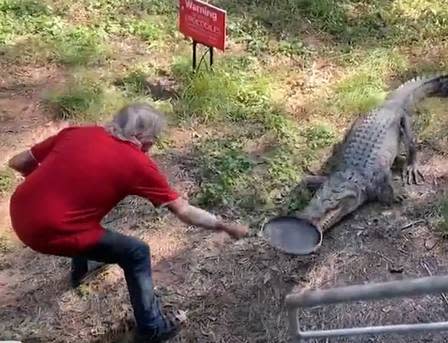 A man has been seen fighting a crocodile using a frying pan on Goat Island, Australia. The photos went viral on social media and caught the attention of the local press, who identified the resident as Kai Hansen, who owns a restaurant in the area.

In the video, Hansen is seen face to face with a crocodile. Soon after, he hits the animal’s head twice with the pan, causing it to run away from the spot.

“I wouldn’t say it’s a daily occurrence, but I have to be safe and do what I can. No one was hurt and the crocodile took a good lesson,” Hansen told Daily Mail Australia on Tuesday. “

The Australian says the presence of crocodiles on the property is constant, as a river is very close by. The animals often attract visitors, who can stay at the restaurant and enjoy nature. One of them was named by Casey Hansen, who even says that the reptile is his “pet”. The name of the “invader” in the video was Fred.

“When Fred moved here, Casey started a walkway near the island’s helipad. Now he’s older than him and that’s a problem,” he told 9 News.

A special crocodile rescue team was sent to the island to capture the reptile.

“Once that happens, Casey will be in his favorite place and all the problems (will) be resolved,” Hansen said.