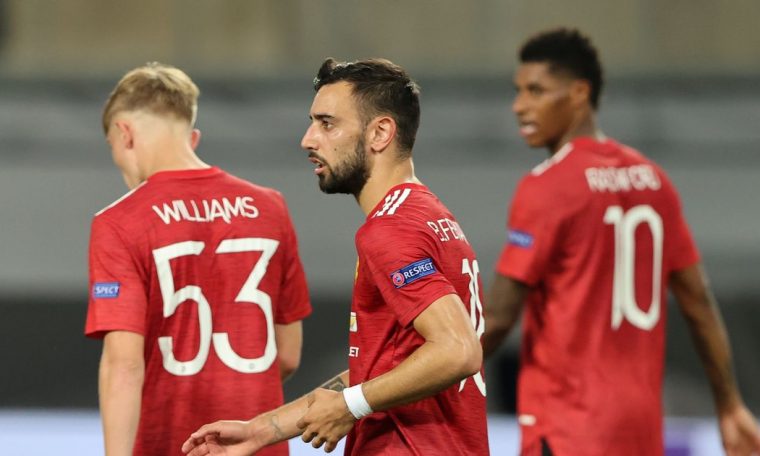 Manchester United are into the semi-finals of the Europa League after beating Copenhagen in Cologne.

United required extra-time to get the job done, with Bruno Fernandes’ 94th-minute penalty getting the Reds over the line. Wolves or Sevilla will be United’s last-four opponents on Sunday.

Ole Gunnar Solskjaer named a strong team for the game, with Aaron Wan-Bissaka, Paul Pogba, Bruno Fernandes, Mason Greenwood, Marcus Rashford and Anthony Martial all coming back into the team having started last week’s win over LASK on the bench.

Greenwood thought he’d opened the scored for United on the stroke of half-time but his clinical strike was ruled out for offside after a VAR check.

Copenhagen goalkeeper Karl-Johan Johnsson kept his side in the tie with an impressive performance, but Fernandes’ converted penalty after Anthony Martial was felled in the area was enough to see United home.

For all the reaction to United’s win, follow our live blog below.

Another clean sheet for United.

The Reds have kept a clean sheet in 73% of their games in the Europa League under Solskjær, the highest managerial percentage with 10+ games at a club in the competition.

He spoke to BT Sport:

“The team is quite tired physically. At this stage of this season it is important to win games like today and we go through. We stay in Germany for quite some time and hopefully we can win.

“Both teams got a little tired and there were more spaces and more chances. They played some good football and credit to them. We could have scored more goals in extra time but we are through.

“I don’t think it was complacency. They played some great football in their last game. We scored one goal, of course we are happier when we score more but now it is time to recover and wait and find out who we get in the next round.”

Copenhagen’s Karl-Johan Johnsson made 13 saves against United, no goalkeeper has ever made more in a single Europa League game.

Manchester United fans think Paul Pogba will sign a new contract at the club after he revealed a not so new haircut.

Sunday marked fours years to the day that United paid £89million to Juventus in order to bring the Frenchman back to Old Trafford making him the most expensive player in world football at the time.

Pogba has lifted two trophies since, the EFL Cup and Europa League in 2017 but the general feeling among supporters is that he is yet to reach the heights of his Juventus career in a red shirt.

VERDICT: United take the wrong player off for the right man in Juan Mata

Manchester United cannot fully concentrate on Jadon Sancho just yet in this neverending season. Their exhausting defeat of Copenhagen was so long it almost ticked over to the date that their season started and Ole Gunnar Solskjaer’s Reds will go marching on beyond a 60th game.

This was a nervier night than even the Copenhagen coach Stale Solbakken envisaged and United suffered some ominous harbingers. A penalty was overruled, the Video Assistant Referee denied them, Mason Greenwood and Bruno Fernandes pinged both uprights, Anthony Martial was ostentatiously denied by the goalkeeper and there was extra-time.

Harry Maguire was piqued by the French official, Scott McTominay smacked his seat in anger and the United players and staff raised their hands in disbelief at an errant Fernandes pass. If anything summarised the ramshackle performance it was that United nearly substituted the wrong player in the 120th minute.

For the second major match running Martial procured the breakthrough with his tap-dancing feet. It would be churlish to regard the penalty United were awarded – their 21st of this term – as luck when Martial was so obviously brought down to earth and Fernandes, flawless from 12 yards, maintained his immaculate record to make it seven in seven and 11 United goals.

Some Manchester United fans on Twitter were allowing themselves to get excited ahead of Monday’s game against Copenhagen after a clip emerged which they thought showed Ole Gunnar Solskjaer saying a deal for Jadon Sancho has been agreed.

Sancho is United’s top target this summer as Solskjaer looks to turn his team into Premier League title contenders, but developments on Monday suggested a deal is far from imminent.

Despite the continued posturing between the two clubs, one positive-thinking United fan believe they spotted Solskjaer discussing a deal for Sancho during a conversation with Nemanja Matic on Sunday night.

Rarely called into drastic action as he kept his place after last week’s win over LASK. Copenhagen’s best chances were blocked. 6

Took a heavy blow to the head early on and it seemed to shake him. Uncharacteristically lost a sliding tackle but brilliantly denied Bryan Oviedo. 6

Made a couple of key blocks to thwart Copenhagen in the first-half but his second-half booking meant he was walking a tightrope and Victor Lindelof came on for him. 6

Blocked just in the nick of time to spare Fred’s blushes and was booked for a cynical foul after half-time. 6

Executed a goal-saving header in his own area but reluctant to get into the opponent’s area and struggled in the second-half. 5

Manchester United are through to the semi-final.

Wolves or Sevilla await the Reds.

Martial off, McTominay on.

Last chance for the Danish side?

Kaufmann tracked by Lindelof who blocks.

The Swede is not pleased with his teammates.

Rashford off, Lingard on.

The winger appeared to be holding his groin.

Martial makes a superb run after a brilliant United move.

The pass from Fernandes is an inch too long.

Two excellent headers from the United captain after conceding the corner.

Exactly what was needed to relieve some pressure.

The defence must keep their heads now and see out the win.

United need a second goal, without a doubt. The final 15 minutes will be precarious if it remains 1-0. And although they have laboured in this game for long periods, they would deserve a two-goal lead on balance of play.

Johnsson again makes a brilliant save and Lindelof hits the post on the rebound.

What a save again.

Pogba feels he was fouled but Fernandes shoots anyway.

Another fine stop from the Copenhagen goalkeeper.

United are through as it stands.

21 penalties for United in all competitions now this season, albeit it’s been a long one. It’s no fluke. They get into dangerous situations and force the opposition into mistakes. And in Fernandes they have a brilliant penalty taker. Fans will just be glad if he doesn’t have to take on in a shootout.

Matic goes on a run from midfield and Martial picks out Mata.

The Spaniard curls the ball way over the bar.

United need one to kill the game.

Martial leaves defenders chasing shadows but can’t get his shot off.

His smart back heel frees Mata but Johnsson saves, again.

So close to killing the game.

Fernandes scores from the spot.

It was never in doubt.

Goalkeeper goes the right way but that’s a superb pen.

Martial fouled in the box.

VAR will check this but the challenge was clumsy.

Rashford slips it through but the angle is too narrow and the goalkeeper saves with his feet.

30 minutes plus penalties if necessary.

Solskjaer is opting for Juan Mata to inject life into this game.

Greenwood is the man who makes way.

Inter Milan have beaten Bayer Leverkusen to reach the semi-final.

Romelu Lukaku and co. aren’t on United’s side of the bracket but could be a potential final opponent if United can win this game and beat either Wolves or Sevilla.