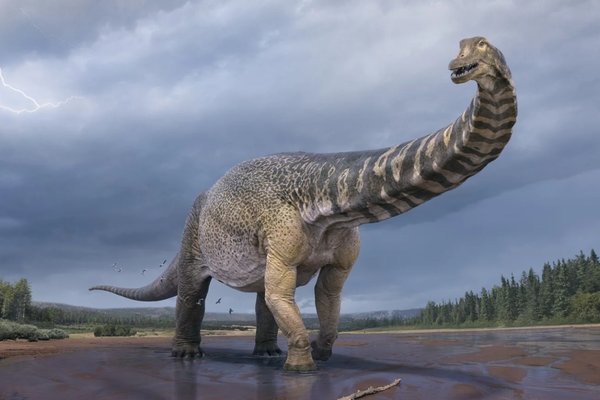 An entirely new species of giant dinosaur was eventually discovered by paleontologists at the Eromanga Museum of Natural History in Australia. by the scientific name of australotitan coperensis, The dinosaur was affectionately nicknamed “Cooper” by researchers and is part of the largest species ever to exist in Oceania.

The word australotitan, which can be translated from Latin for “southern titan”, is a sauropod with a width of about 30 m and a height of 6 m. For ways of comparison, the dinosaur was the size of a professional basketball court and weighed as much as “1,400 red kangaroos,” the museum describes.

The first evidence of giant dinosaurs was discovered near Cooper Creek, one of Australia’s most important rivers and one of the world’s 100 largest rivers. This was one of the reasons the species was given the name “coparensis”. Although there is no evidence that other species coexist, it is one of four sauropod species known to live in the region.

According to the analysis of fossils found by the researchers, Cooper and his family lived between 92 million and 96 million years ago. At the time, studies indicated that Australia was still attached to Antarctica and that animals moved freely through the southernmost region of the planet.

Although the new species were confirmed only in 2021, the first study emerged after excavations carried out in 2007. After more than a decade of analysis, scholars have concluded that it is one of the 15 largest species of dinosaurs in the history of the planet.

Thus, the bones of the specimen found had been compressed into the rock over the years, requiring the team to perform an extraction to identify it. Comparing Cooper’s bones with those of other dinosaurs was also a challenge, although it was a necessary step in verifying the uniqueness of the animal.

Paleontologists believe that new discoveries can still be made in the Australian plains, where new technologies help to facilitate excavation efforts. However, excavation in this area is a very complex mission and hinders the development of new studies.