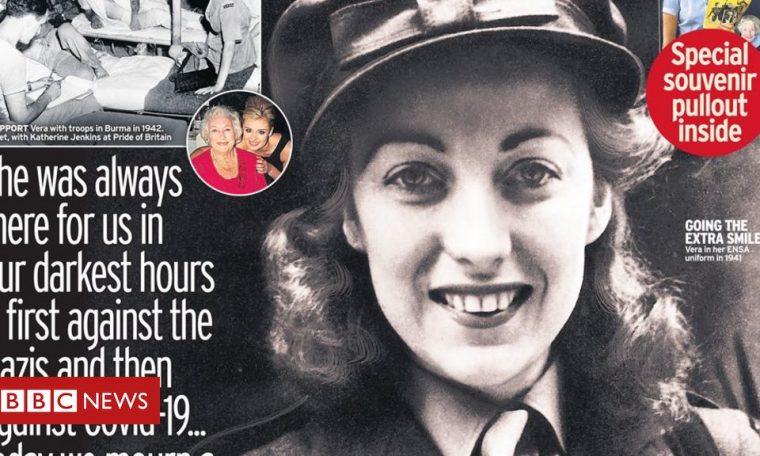 Black and white wartime portraits of Dame Vera Lynn are on many of the front pages, as the papers pay tribute to the singer who has died at the age of 103.

Dame Vera appears in her Entertainments National Service Association uniform on the front of the Daily Mirror, which calls her a “true British hero”. It says she was “always there for us in our darkest hours… first against the Nazis and then against Covid-19”.

For the Daily Telegraph, she “embodied the brave spirit of wartime Britain”, while, in the words of the i, she was the plumber’s daughter who “lifted a nation in its darkest hour”.

“Goodnight Sweetheart”, says the Times, next to a glamorous black and white portrait of the singer in her heyday. The paper comes wrapped in a tribute to Dame Vera.

The Metro’sfront page carries the lyrics of her most famous song, We’ll Meet Again.

For the Daily Mail, she was “the voice of a generation”.

The main story for the Mail is the government’s abandonment of its coronavirus tracing app. “How Many More Corona Fiascos?” asks the front page headline. It cites a string of U-turns over testing, protective equipment, schools and quarantine.

It’s also the lead for the Times, which says the failure of the technology leaves the government’s virus tracing strategy in “disarray” and hampers efforts to lift social distancing restrictions. Its leading article says Boris Johnson “needs to reassure the country that he really does have a plan to get out of this mess”.

The project has become a “national embarrassment”, says the Telegraph, which calls Health Secretary Matt Hancock “hapless and app-less”.

The Guardian points out that three months and millions of pounds were spent on “technology that experts had repeatedly warned would not work”.

The cover of the Economist has an illustration of a tattered Union Flag shot through with virus-shaped holes. “Not Britain’s finest hour”, it declares about the country’s response to the pandemic, arguing that the UK has the “wrong government for the covid crisis”. “It has played a bad hand badly,” is the magazine’s verdict.

Sign up for a morning briefing direct to your inbox

According to the i newspaper, millions of proposed GCSE and A level grades could be marked down by exam boards this summer because “teachers have been too generous in their predictions” for students who’ve been unable to sit any papers. Quoting analysis by a think-tank, it claims that draft predicted grades are higher than the average awarded last year in every subject. The i expects a backlash from students and schools on results day in August.

The Financial Times reports that shares have plummeted in Wirecard, once a “star of the German tech sector”, after a warning by auditors that €1.9bn (£1.7bn) euros was missing from its accounts. The company, which is based in Munich, processes debit and credit card transactions. The FT says Wirecard was worth €24bn two years ago but is now valued at less than €5bn. The company says it’s working intensively with the auditor to clarify the situation.

Unusually, the Daily Star leads with politics, criticising Foreign Secretary Dominic Raab’s comments about taking a knee to support Black Lives Matter. Mr Raab’s remark that he thought it was inspired by the television drama, Game of Thrones, is described by the Star as a “gaffe”, just three weeks after the prime minister was embarrassed by his adviser Dominic Cummings. The paper calls the pair “Dom and Dumber”.

In a stinging letter to the Guardian, the former Labour leader Neil Kinnock suggests the foreign secretary’s ignorance comes from, in his words, “the same abyss as his surprise that Dover is important to trade movements”.

Writing in the Guardian about Labour’s general election post-mortem, Ed Miliband urges the party to “learn the right lessons” from defeat. Voters “want fundamental change”, he argues, but in 2019 they didn’t believe that Labour could deliver what it promised.

The Telegraph has a striking image of the Red Arrows and their French counterparts streaking across the sky above the statue of Sir Winston Churchill during yesterday’s visit to London by French President Emmanuel Macron.

The Sun calls it a “love-in” and says there’s a “new urgency” about a post-Brexit trade deal.

The Spectator’s political editor, James Forsyth, senses a possible compromise, in which the UK could be free to “move away from the EU’s level playing field”. But the EU would then have the “right to impose tariffs” on UK goods – allowing “both sides to claim satisfaction”.

The Times highlights what Nasa is billing as the “first ever” round-trip mission to Mars. A rover called Perseverance is due to blast off from Florida next month with the task of gathering rock and soil specimens for a second probe, which will be sent to collect them in 2026 for delivery to Earth. Nasa, it says, “hopes to discover signs of organisms and to start creating oxygen for future explorers”.

The Telegraph reports that families could be free to go on foreign holidays from 4 July under plans for so-called air bridges with a small number of countries with low levels of coronavirus. The arrangement would avoid the need to spend 14 days in quarantine when tourists return home. Government sources tell the Telegraph that ministers are keen to set up the first air bridges to popular destinations such as France, Spain, Greece and Portugal.

According to the Sun, live music will return to the UK this summer for the first time since the lockdown – at socially distanced drive-in gigs. It says fans will be able to take cars to the festival-style events and park in designated spots to watch a host of performers. Gary Numan, who appropriately had a big hit with Cars, is keen to take part in what the Sun is calling “car-owner virus gigs”.