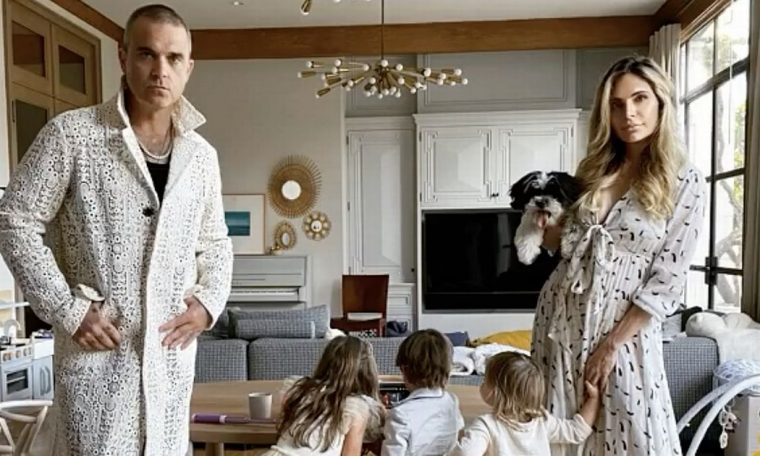 Robbie Williams has hinted he might uproot his young family from Los Angeles and move them all back to his native Stoke-on-Trent.

However, Rob has realised his kids could end up rubbing shoulders with “entitled” fellow rich kids if he doesn’t move them out of the City of Angeles and back to Blighty.

No Regrets singer Robbie thinks he may in fact end up regretting raising his sons and daughters if they adapt ‘bratty’ from their peers in the American sunshine.

The Take That star told The Sun on Sunday: “There are some bad things about LA too. I didn’t even know the word ‘entitlement’ until I got here.

“There are these kids with a sense of entitlement because of the place they were born and the parents they have and having the money that they have.

“I was like, ‘I don’t want my kids anywhere near these kids’. I’d never seen it in my life before and it literally made me slack jawed.”

Earlier this month, Robbie and his wife celebrated their ten year anniversary.

Commemorating the landmark with a loved up snap on Instagram, Ayda wrote in the accompanying caption: “10 years, 8 dogs, 4 kids, 3 cats, 2 turtles, and 1 best friend later, ‘I Do’ all over again.”

Robbie has previously discussed how the couple almost never married as they endured a temporary break-up.

The chart topping star said it took Hollywood friend Cameron Diaz’s intervention to make him realise he could be throwing a perfect future away.

He explained on the (Staying) At Home With The Williamses podcast: “We were at the Chateau Marmont and we’d split up and I was chatting away with people and I started to chat with Drew Barrymore and Cameron Diaz and I started to espouse about this brilliant person I’d just ended a relationship with.

“And Cameron Diaz said, ‘It doesn’t sound like that one’s over’. And in that moment – I don’t know why it was – the universe went, ‘Go to Ayda. Be with her. Marry her’.”