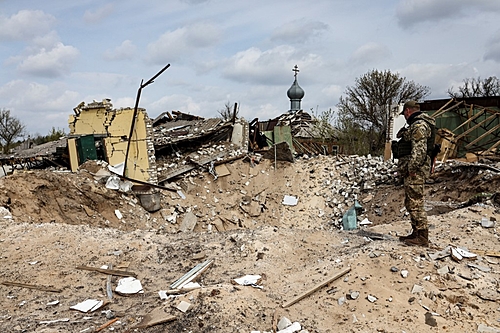 Two weeks after withdrawing troops from the outskirts of the Ukrainian capital, Kyiv, Russia began bombing the area and increased attacks on other parts of the country.

The capital’s mayor Vitaly Klitschko has advised refugees and women not to return to the city. International authorities and humanitarian aid agencies have been registering a rapid pace of withdrawal since the beginning of the month.

Warning sirens were sounded in different parts of Ukraine this Saturday (16). There were explosions and attacks in Kyiv, Lviv and Kharkiv.

A Ukrainian statement said Russia aims to blockade the city of Kharkiv and has more than 20 strategic groups with thousands of troops in the region. Also according to information, the Russian government is trying to control the Mariupol port area.

Amid the intensity of the invasion, more than ten members of the British government were banned from entering Russian territory by Vladimir Putin’s management.

According to the Russian official, the decision was based on “unprecedented hostile action by the UK government” to isolate Russia internationally and to “stretch the domestic economy”.

::China rejects sanctions against Russia and says measure doesn’t work: “We are against” ::

For Putin’s government, the British leadership supplies lethal weapons to Ukraine and orders efforts in that direction within NATO (North Atlantic Treaty Organization).

In a statement, the Russian Foreign Ministry said the list of banned officials would be expanded to include “British politicians and members of parliament who continue to ignite anti-Russian frenzy, collectively threatening Moscow.” pushes the West to use the language and engage in “a wicked encouragement of the neo-Nazi regime in Kyiv.”