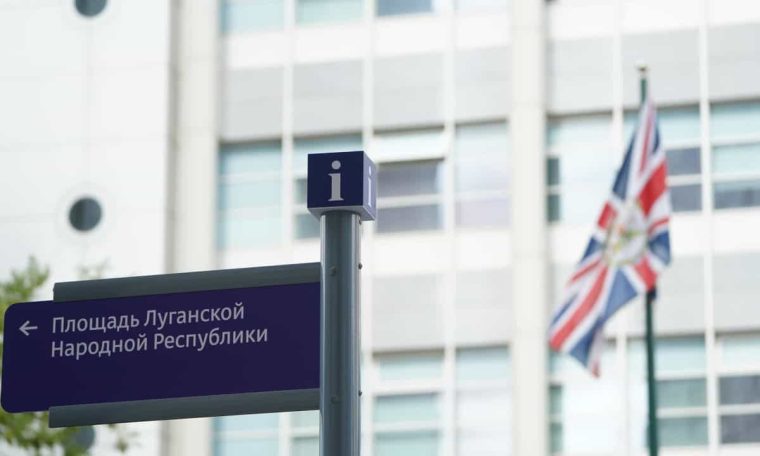 NoStreets provoking Moscow have been renamed areas where fighting is most intense in Ukraine.

Russian President Vladimir Putin recognized the independence of the two regions in February, shortly before sending troops to “liberate” them from Ukraine.

The US and Britain did not recognize the “People’s Republic” of Donetsk and Lugansk, but Moscow officials said they would have to at least recognize the new address if they wanted to receive their mail.

A new sign posted on Friday in the street of the British Embassy changes the name of the place to Lugansk People’s Republic Square.

Since June the US Embassy in Moscow, which is located in the People’s Republic Square of Donetsk.

The United States had already used this tactic. In the 1980s, the Soviet embassy street in Washington was renamed Andrei Sakharov Square in honor of the Soviet nuclear physicist, human rights activist, and dissident.

Since 2018, the section of Wisconsin Avenue in front of the new Russian embassy has been symbolically called Boris Nemtsov Square, an opposition member who led protests against Putin, seeking to expose corruption chaos and the Kremlin in 2015. He was shot dead nearby.

The Russian Embassy in London, at least for the time being, keeps its address in Kensington Palace Gardens.

On 24 February, Russia launched a military offensive in Ukraine, condemned by much of the international community, which responded by sending weapons to Ukraine and tightening economic and political sanctions on Moscow.