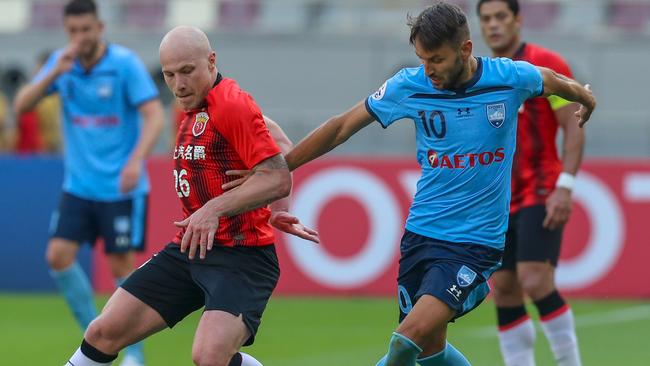 Sydney FC were made to pay for the wasted chances as their resumption of the AFC Champions League campaign came to a halt in Qatar on Thursday night.

A brace from Lee Shinglong secured the Chinese giant Shanghai SIPG, which was backed by Susquehanna star Aaron Mui in a 2-1 win over the Sky Blues.

With the loss, Sydney fell to Group H, and the A-League champions have a lot of work ahead of them in the remaining three group matches if they are to make it into the top two and advance to the Nakaya.

But it could be a good night for Sydney, who should have taken a 3-0 lead in the opening quarter of an hour.

The Sky Blues started strongly and should have moved on after five minutes.

Speedster Trent Buhagier got behind a dozer before the Shanghai defense put a square ball in the way of team-mate Costa Barbarossa.

But only by defeating goalkeeper Chen Wei, the New Zealand international team fired his shot and failed to score.

But three minutes later the roles were reversed with a very happy result for the Sky Blues.

The Barbarossas were the providers this time around, with Buhagir running past and putting his shot into the top corner of the net to give the Australian team a 1-0 lead.

Sydney continued to attack. It was only the woodwork that prevented them from doubling their lead in the 14th minute when a header from defender Ben Warland hit the post.

The return was for Sky Blues midfielder Paolo Retre, who fired his shot over the crossbar.

Barbarossa missed another chance 10 minutes earlier in the second half.

A host of missed opportunities came to annoy Sydney.

Not surprisingly, it was Mui who supplied the ball to equalize for Shanghai, and his cross went home through Lee in the 63rd minute.

Tired of Sydney’s gaze, Lee then put Shanghai in another title in the 80th minute.

Sydney’s loss was due to goalkeeper Thomas Hayward-Ballet’s stoppage time thanks to the unavailability of Andrew Redman.

In a state of mental agility, Hayward-Ballet took the ball out of his penalty area and handled the ball, giving the referee no choice but to send him.