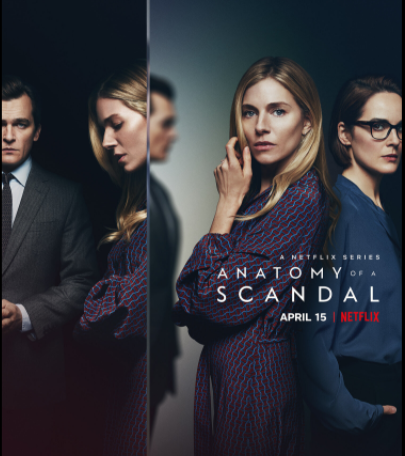 This new political thriller series has grasped the audiences quite well, and they are increasingly asking if this series is true story-based?

The binge-worthy series revolved around the two main characters James Whitehouse MP played by Rupert Friend, and Sophie Whitehouse, played by Sienna Miller. The story begins with the parliamentary minister James Whitehouse embroiled in a scandal that goes through so much hype, which turns the high-profile marriage upside down.

This series was developed by David E.Kelley and Mellisa James Gibson, based on a novel with a similar name by Sara Vaughan. Behind their past hit shows like House of Cards, it also makes viewers shocked with its sudden reversal story.

Besides Bridgerton, Elite, Business Proposal, The Ultimatum Marry or Move On, The Marked Heart, and Inventing Anna, the series has endured as one of the Netflix Top 10 rankings since its April release.

This series is available on Netflix, so you can stream it whenever you want, but not yet on BBC iPlayer, Hulu, or Disney Plus.

The Story Behind Anatomy Of A Scandal:

The Anatomy of a Scandal is not a true story-based series. Instead, the story comes from Sarah’s Vaughan best-selling book published with the same name in 2018. According to the novel’s author, she was working as a political reporter where she drew experiences of cabinet ministers and their shocking scandals.

Moreover, it’s likely to be about our society, it’s distressing realities, and how political goons and cabinet ministers grip these real-life events.

In an interview, Author Sarah Vaughan spoke that the real-life events inspired it in the headlines of British news in the years between the 2000s to 2010, which encouraged her to write Anatomy of a Scandal.

She explained more about this when the first scandal in 2004 exposed Prime Minister Boris Johnson, who was the frontbencher of the conservative party all along. Then, however, he lied about the extramarital relationship, but he was dismissed from his designation when the allegations became true.

Vaughan expressed that James’ character did not depend on Johnson, the now-Prime minister’s approach to the truth that prevailed the most.

While given another interview, the writer said that the book was inspired most by the 2014 footballer case of Ched Evans, who was accused of a 19-year-old woman’s sexual assault back in 2011. Before the retrial, Evans was sentenced to half, and then the court permitted new evidence from the two eyewitnesses’ details about this horrendous assault. The woman had to speak up in the court with great effort. However, Evans was not found guilty.

Even in her own words, Sarah Vaughan says to the publications:

“I was so disappointed that the reporters delineated the sufferer and how utterly horrific the situation was to come forward with the courage to speak with the rape conviction and doubts expressed in the newspapers and courtrooms.”

“The issue comes just days before the #The MeToo movement gained impetus, a sensitive time when it was considered wrong to talk about gender imbalance, harassment, and injustice.”

“I do not want my 8-year-old daughter to go through the same ordeal as I did in my early days until the twenties, learned to steer sexual politics,” Van said..”

“I articulate concerns regarding power, the notions of truth, the paradoxes – all of which are perceived to agree upon at Oxford and Westminster.”

According to Director C.J Clarkson, she was desperate to make the book appear on the screen. She explained: “I read the whole book in just a day and a half.”

“I asked myself some important questions about the real ‘scandal,’ whether it was not just an attack on a young woman by her power-drunk boss in the elevator of the House of Commons. But the truth is, more broadly, about wealth, fame, privilege, and men who believe that they are the masters of this world and that the whole world revolves around them.”

She said: “This was a different kind of thrilling psychological, courtroom drama, the story of a marriage gaining popularity. I have seen that it will divide people’s thoughts. Hence, it will force us to talk about important issues.

Due to this concern, it becomes so realistic that people delve into the impact that it is a true story. However, it is a fictional storyline based on the novel.

In short, the impact of this storyline is so powerful that it gained momentum in people’s minds, so the audiences started wondering about the reality-based story. However, according to the author and director, the story is inspired by a real-life incident in our society.

Still, it won’t be able to be discussed because of various perceptions and community pressure. Other things also that directors shed light on the elites, their social stratum, and the narcissistic personality of these rich men who break the rules.

In addition, major plot twists are happening in future episodes, which will probably grip viewers’ thoughts. Hope so!!!!