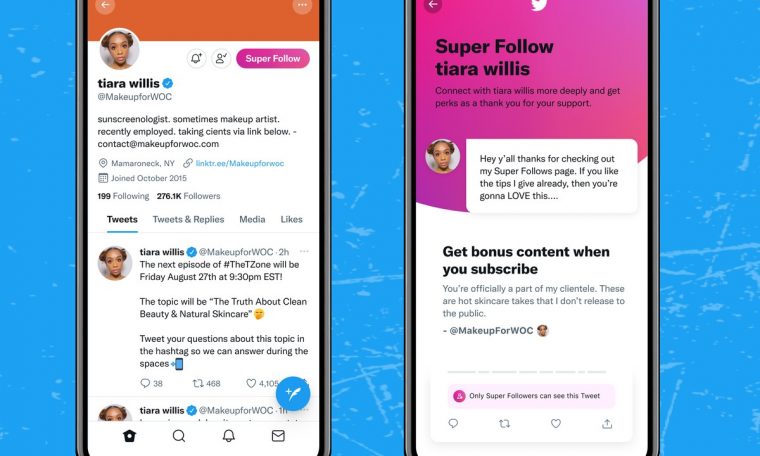 Twitter this Wednesday (for the first time) announced the arrival of Super Follows, a tool for users to provide exclusive content to followers who pay a monthly subscription.

The option to charge for additional tweets has been released to a small group of users in the United States. And, for now, only users in the US and Canada can subscribe to the content.

According to Twitter, the option to pay for exclusive posts from certain accounts will be rolled out in more countries in the coming weeks.

The social network also states that, at this first stage, Super Follows is only available on iOS. Soon, the tool will also be offered on Android and the Twitter website.

For example, featured posts may include behind-the-scenes content and direct information.

Users who pay for additional content will receive a stamp, which will be highlighted when replying to tweets from another account.

Twitter promises to release other features for customers, including exclusive conversations on Spaces, newsletters, various plan options, and the ability to subscribe anonymously.

When the tool is available in Brazil, all you have to do is tap on the “Super Follow” button, which will be displayed on your partner Twitter account.

Then, it will be possible to analyze what the additional content and subscription cost will be. Afterwards, just confirm the interest and initiate payment in the social network app.

According to Twitter, users will be able to unsubscribe at any time by going to the settings of the App Store.

See also  Insead has the world's best MBA, according to FT. The business