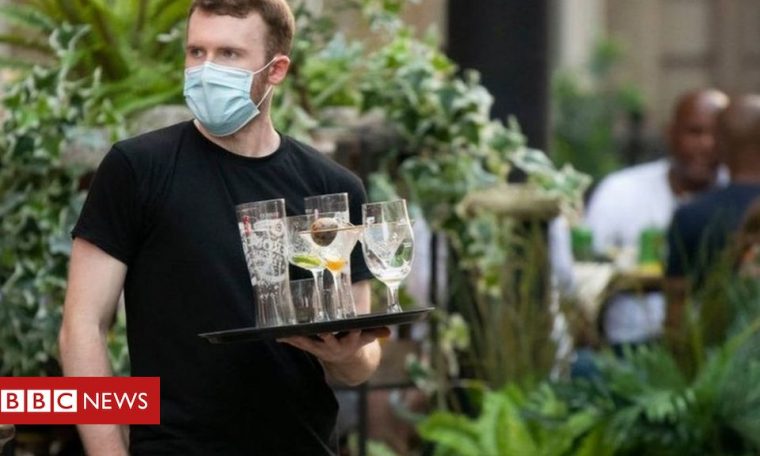 Employment in the UK fell by the largest amount in over a decade between April and June, official figures show.

The number of people in work decreased by 220,000 on the quarter, said the Office for National Statistics.

This was the largest quarterly decrease since May to July 2009, the depths of the financial crisis.

The youngest workers, oldest workers and those in manual occupations were the worst hit during the pandemic, the ONS added.

The figures do not include the millions of people who are furloughed, those on zero-hours contracts but not getting shifts, or people on temporary unpaid leave from a job, as they still count as employed.

As such, they do not capture the full impact of the pandemic. Similarly, the UK unemployment rate was estimated at 3.9%, largely unchanged on the year and the previous quarter.

Jonathan Athow, deputy national statistician at the ONS, said: “The groups of people most affected are younger workers, 24 and under, or older workers and those in more routine or less skilled jobs.

“This is concerning, as it’s harder for these groups to find a new job or get into a job as easily as other workers.”

How bad is this likely to get?

The UK economy has been battered by the coronavirus pandemic, but unemployment has not surged as much as feared because large numbers of firms have furloughed staff.

However, analysts said unemployment was set to worsen in coming months as the scheme wound down, warning of a looming “cliff-edge” and a “lull before the storm”.

From restaurants to retailers, many UK businesses are already planning job cuts with 140,000 redundancies announced in June alone.

According to the ONS, the number of average hours worked continued to fall in April-June, reaching record lows both on the year and on the quarter.

The number of people claiming universal credit – a benefit for those on low pay as well as unemployed people – rose to 2.7 million in July, up by 117% since March.

How are ordinary people coping?

Theatre technician Charlotte Baker, 29, is out of work as a result of the coronavirus crisis.

She started a new job at the Fairfield Halls in Croydon in September last year and was furloughed in March.

In June, she was made redundant, even though she could have been kept on furlough.

Now management at the Fairfield Halls has said the venue will not reopen until April next year, forcing her to contemplate a possible career change.

“It’s definitely an uphill struggle and it’s proving harder than previous ones,” she told the BBC. “It’s hard to have a positive outlook.”

Charlotte has been looking into doing a carpentry course, but to obtain the necessary City and Guilds qualification would require her to spend £5,000 on training.

“It’s a mountain to climb. I wouldn’t mind climbing that mountain if it’s something that I’m passionate about, but I’m not sure,” she says.

“I’m hoping to make a decision by the end of August.”

How is this affecting people who still have jobs?

Between April and June there were falls in pay for those still working, with regular pay levels down 0.2% compared with a year earlier – the first negative pay growth since records began in 2001.

The number of people on zero-hours contracts also increased to more than one million.

“Early indicators for July 2020 suggest that the number of employees in the UK on payrolls is down around 730,000 compared with March 2020,” said the ONS.

It believes the main reason this is more extreme than the fall in employment is because of workers who have a job but are not doing any paid work at the moment.

It added that a large number of people were estimated to be temporarily away from work, including furloughed workers – approximately 7.5 million in June 2020, with more than three million of these being away for three months or more.

The number of workers covered by the furlough scheme has since risen to 9.6 million by 9 August, and has yet to record a fall in any week since it began, separate statistics published on Tuesday by HM Revenue and Customs show.

The ONS said there had also been a sharp fall in the number of self-employed people between April and June.

It said there were 4.76 million self-employed people, 14.5% of all people in employment, a record 238,000 fewer than the previous quarter.

Is it all bad news?

If you’re a glass-half-full sort of person, there is some less than awful news in the latest labour market figures.

The number of vacancies, for example, rose from its record low by 10% in May to July as lockdown restrictions were eased. The number of hours worked saw a record drop in the second quarter from April to June, but in July it was down by only 3%, less than half the fall in May and June.

However, there are some less jolly signs. The number on employer payrolls had only dropped marginally in the previous two months, but saw a much bigger drop in July, down 114,000, in spite of the reopening of many shops, restaurants and pubs.

And employers are increasingly making employees bear the risk that there isn’t enough work for them to do, with the number of zero-hours contracts rising above one million for the first time.

And then there’s the record drop in self-employment. And all this in spite of the government spending more than £40bn trying to protect employment through furlough and self-employed income support.

Unemployment tends to peak well after economic shocks have been and gone: this time will be no different.

What are economists saying?

Ruth Gregory, senior UK economist at Capital Economics, said the latest employment figures were “the lull before the storm”.

She added: “The cracks evident in the latest batch of labour market data are likely to soon turn into a chasm, with the unemployment rate rising from 3.9% to around 7% by mid-2021.”

She said further rises in unemployment in the coming months were “all but inevitable as the furlough scheme unwinds”.

Capital Economics forecasts that the unemployment rate will peak at 7% in mid-2021 and remain above its pre-pandemic level of 4% until the end of 2022.

Ms Gregory said this suggested that the economic recovery would be “slow going”.

Jeremy Thomson-Cook, chief economist at Equals Money, said the figures showed the true level of those out of work had been “very effectively lowered by the government’s furlough scheme” and that the worst lay ahead.

“Unfortunately, the end of the furlough scheme will present a cliff-edge, statistically and economically, for those currently relying on government support to make up their wages.”

Prime Minister Boris Johnson said some parts of the economy were “showing great resilience”, but added: “Clearly there are going to be bumpy months ahead and a long, long way to go.”

Chancellor Rishi Sunak said the figures showed that the government’s “unprecedented support measures” were working to “safeguard millions of jobs and livelihoods that could otherwise have been lost”.

Shadow work and pensions secretary Jonathan Reynolds said it was “extremely worrying” that older workers, the self-employed and part-time workers had been hit hardest.

“Labour has repeatedly warned the government their one-size-fits-all approach will lead to job losses. These figures confirm what we feared – Britain is in the midst of a jobs crisis.”

Have you lost your job because of the pandemic? Please share your experiences by emailing [email protected].

Please include a contact number if you are willing to speak to a BBC journalist.