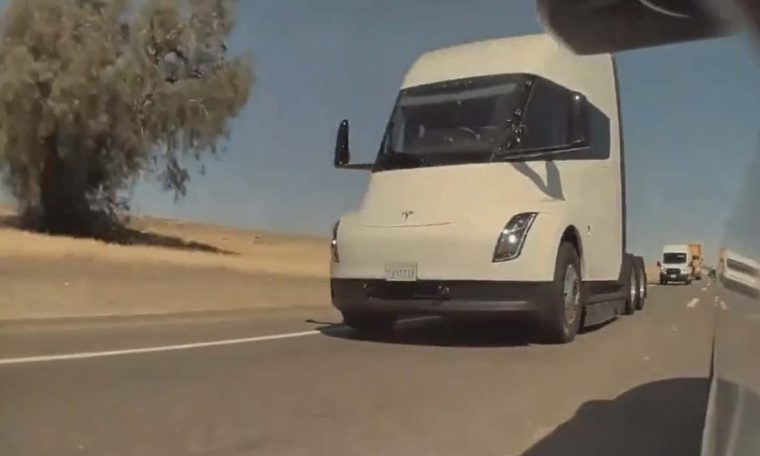 In a video posted to Twitter, Tesla’s electric truck, without a trailer, was seen traveling on a road in California, United States. There are seconds of “presence”, in which it is mainly possible to see the details of its frontal design.

The scene arrived by a Tesla Owners Silicon Valley profile with nearly half a million followers on the social network (which could soon be in Elon Musk’s hands). Aimed at Tesla owners in Silicon Valley, the account bills itself as representing “just a club,” yet the footage it posted of the truck looks very real.

According to the post’s description, the electric semi was on Highway 580 West, California. View Tweet:

Shortly after the Tesla Owners Silicon Valley post, it was the turn of a Canadian profile drive Tesla on Twitter to post a Tesla truck running in another corner of the US state of California. On the El Camino Real route, the semi is seen for a few seconds longer, revealing its back.

Now, the electric truck first appears in the rearview mirror of the car of the person recording the video. Then, Semi passes by and shows off his very peculiar rear. Then, for a few more seconds, the truck is attached, making a very strong view from its side. It is still possible to notice the numbering engraved on its bodywork: MNR-16; Tesla Inc.; US.dot.2298288.

As expected (which also fits in the comments of the two posts on Twitter), the videos are of the same truck, caught in nearby areas and under possible testing ahead of release. Reservations for half units are already open, equivalent to approximately R$ 100 thousand. According to the company, the Tesla Semi (from the “semi truck”, as they call the mechanical horse, the vehicle that pulls the semi-trailer onto the trailer) should go into production next year.