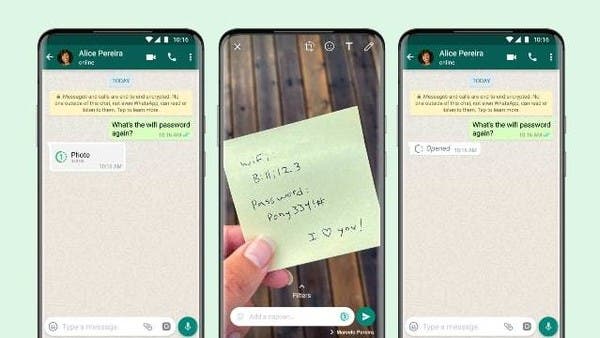 WhatsApp has introduced its own View Once feature, which deletes the photo or video once the recipient has opened the chat. The platform wants to better compete with the Snapchat picture messaging app.

When sending a photo or video, you can choose to display this content only once by clicking Button 1 to the right of the Send button. After the recipient opens it, it is deleted.

Once you view the media content, the message Open appears. The recipient can see that this is a hidden image. So this is a feature you want to use with people you trust won’t take screenshots (you won’t know they did).

In June, Facebook CEO Mark Zuckerberg confirmed that the feature was coming. This is despite the lack of details about its launch date.

As an example of how to use the feature, the platform uses the example of sending an image of sensitive information. Like a wireless network password or share a picture of some clothes you’ve tried on

There are probably other, less useful uses for this type of feature. But either way, it pays to have a choice between hiding the app’s messages, which currently disappear after a week, and your permanent chat history.

Snapchat, known for its Stories feature that allows users to post updates that disappear after 24 hours, has grown in popularity over the past year as pandemic restrictions kept users at home.

The company has also added new features to its messaging app to attract more users.

Facebook says that the new feature is a step taken to give users more control over their privacy.

See also  10 million DOGE recovered when it is garbage!

The company is also talking about bringing end-to-end encryption to its lineup of messaging services. It plans to make it interoperable in the future.

WhatsApp enabled end-to-end encryption by default in 2016. But for Messenger and Instagram, the premium privacy measure may still be years away.