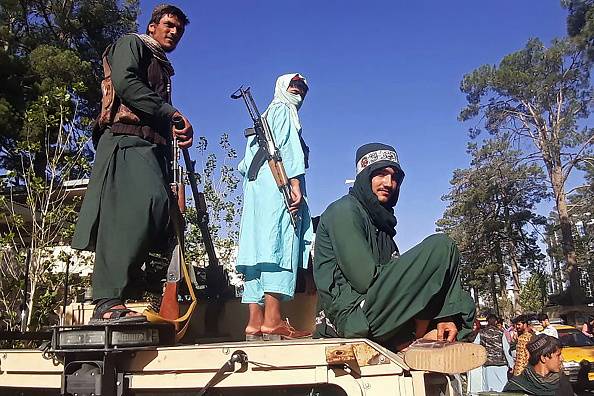 Taliban: The group’s ideology is far from concepts like left or right (AFP via Getty Images / Getty Images)

Although Afghanistan have a socialist past and mujahideen, Afghan fighters who were the first Taliban, has fought against the domination of the Soviet Union In the 1980s, left or right ideologies were far from the group’s prescription. You mujahideen According to political scientist Sébastien Boussois of the University of Brussels, they simply wanted an end to foreign shoes in the country, without caring too much about what happened next.

Of course it was not just this: Islamic militants also advocated strict interpretation of Sharia, Muslim law and the Quran, as well as a return to medieval values ​​such as the obligation to attend a mosque and a ban on the consumption of alcohol. . “Taliban, founded on the structures of the movement” mujahideen, has always propagated an ultra-radical view of religion and has not even taken into account the concept of nationality, because the important thing is to wave the flag of Islam”, says Boussois. Democracy is also not on the Taliban’s wish list. Is.

The little socialist experience in the country between 1978 and 1992 is not remembered by the fighters who inspired the Taliban mujahideen, aided by the United States, spent years fighting first the Soviet Union and then the Afghan government. Soon after the withdrawal of Soviet troops in 1989, the group began to take shape. “From the beginning, the Taliban had a posture that was closely associated with the mega-radical reading of Islam and had nothing to do with the left or the right,” says Boussois.

The roots of the Taliban are tied to the ancestral values ​​of the Afghan tribes, which were transplanted long before the events necessary to shape contemporary political ideology centered on the divide between left and right, such as the French Revolution of 1789. One of its main influences is the Pashtun morality, of the tribes of the same name that make up the majority of the rural Afghan population. For centuries, they have used concepts such as revenge (such as “an eye for an eye and a tooth for a tooth”), corporal punishment to commit crimes, and obstruction of female education.

In general, fees paid by businessmen and entrepreneurs are collected – moreover, participation in public administration requires agreeing to the values ​​of the group. Helping the poor is done as it was centuries ago, through charity, when it is.

The entire banking system is also subject to the rules of fundamentalism, with overseeing loans and other functions performed by religious and civil authorities. Earning money with interest is prohibited, as it is seen as “usury”. Generally speaking, all businesses must have the approval of the local Taliban chief. “This is the ideology of the Middle Ages, which includes the spread of religion to every aspect of everyday life,” says Wali Nasr, a professor of Middle East studies at Johns Hopkins University in the United States.