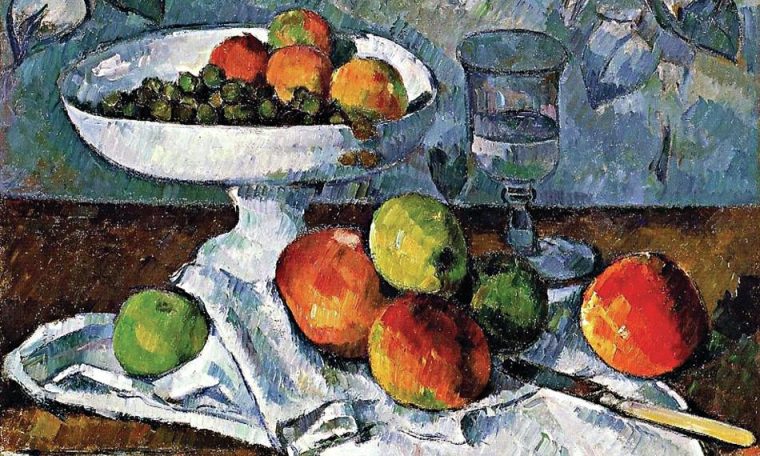 “The history of art has never been the same since Paul Cézanne’s still lifes, landscapes and later paintings,” says London’s Tate Modern. The institution defines the French Post-Impressionist as “the father of modern painting”, as his work established the key to the transition to 20th-century art. And now, his work surprises once again and captivates the public through the artist’s largest monographic exhibition since the 1990s. Opened in Chicago from October 6th, it will travel to the Tate Modern in London under the name EY Exhibition Cézanne.

The British Museum says twenty-two paintings by the influential painter will be brought together in “a unique exhibition in a generation”. This will include the acclaimed painting, Still Life with a Fruit Plate, on loan from the Museum of Modern Art in New York. Although the artist’s life and work are represented by 80 paintings, watercolors and drawings in Chicago, Tate Modern director Frances Morris explained that the high cost of assembling exhibitions of this caliber meant that London’s location “has to be very selective.” was obliged to”.

Tate Modern curator Natalia Cidlina told The Guardian: “The exhibition opens with one of the artist’s first self-portraits, an image of a sophisticated man about to conquer the capital as he leaves his provincial home for Paris. prepares for.” As such, it traces the events, places and relationships that shaped the work of “one of the most respected and enigmatic artists of the late 19th century”. In turn, another room in the exhibition will bring together several iconic works by Cézanne Bathers, including the famous Bathers 1894–1905. Therefore, the curators explain, “the aim is to understand the artist in his own context, in each of his nuances, as an aspiring painter who struggles to doubt his surroundings.” Furthermore, Morris explained to the British newspaper that a century earlier the Tate Modern had rejected earlier proposals for Cézanne’s works, considering them “too modern”. However, years later, Tate’s revolutionary curator Samuel Courtauld “set up a fund that skillfully specified which artists could be acquired for the national collection and Cézanne was one of them”, the space’s director said. Said, thus, “The Tate became the first national public museum in the UK to house a painting by Cézanne in 1924. And since then the artist has been a really important part of the collection”.

However, the organization has announced that this is its last blockbuster exhibition.