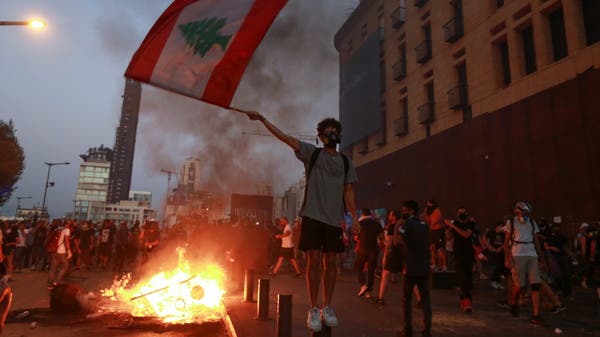 Lebanon’s Red Cross on Wednesday announced 84 people were injured during the Beirut demonstrations.

Heavy demonstrations took place in Beirut on Wednesday evening first anniversary of port explosion In which more than 200 people were killed and 6500 were injured.

What is remarkable about this performance, demanding to know the truth about Cause of this explosion and accountability of those responsible About them, the absence of party flags among the protesters.

A minute’s silence was observed during the demonstration at the time of the devastating explosion.

Clashes also broke out between protesters and security in front of the Parliament building, as protesters pelted stones at the entrance of Parliament and tried to cross the main gate. For their part, security forces fired tear gas and used water cannons to disperse the protesters in front of parliament.

The army brought in reinforcements, while protesters opened fire in various parts of the capital.

For its part, the Lebanese Red Cross announced that nine injured people had so far been transferred to hospitals from the center of the capital and from the Jemezeh region, which is witnessing demonstrations, while 45 wounded were treated at the scene. Was.

Lebanese banks, companies and government offices were closed today, Wednesday, as Lebanon celebrates the one-year anniversary of the horrific explosion in the port of Beirut.

The bleak anniversary comes amid an unprecedented economic and financial downturn, and a political deadlock that has left the country without a functioning government for a year.

The explosion, one of the largest non-nuclear explosions in history, was the result of the ignition of hundreds of tons of ammonium nitrate after a fire broke out in its storage area.

Documents revealed that highly flammable nitrates were stored indiscriminately at the port in 2014 and over the years many high-ranking officials knew about its existence and did nothing.

A year later, there has been no accountability, and the investigation has yet to answer questions such as who ordered the shipment of chemicals and why officials ignored repeated internal warnings about their danger.

iPad mini 6 excites users to return to the iPad