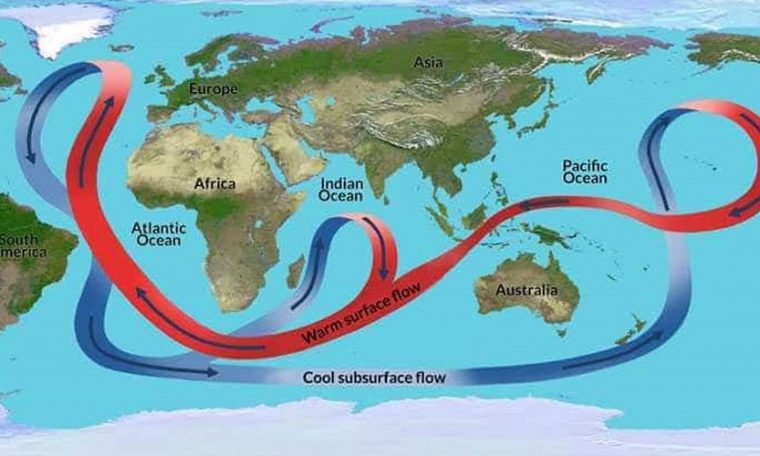 new research, Published last week in the journal Nature, hinted at pessimistic prospects and raised concerns among environmental scientists. This can cause the collapse of an entire system of ocean currents known as the Atlantic Meridian Circulation (AMOC).

AMOC There are basically two ocean currents that transport heat around the world. Northward surface currents bring heat from the tropics and the Southern Hemisphere. Here the heat is transferred to the colder environment; The water thickens, sinks and then returns to the south as very few currents.

What if the current ocean system collapses?

The full extent of the effects of the Atlantic Meridian Circulation is not fully explored, but is thought to be of critical importance to the warming of the Northern Hemisphere. It is reportedly responsible for up to a quarter of global heat transfer to the north between the atmosphere and the ocean, helping to stem the sharp drop in temperature in northwestern Europe.

It is also considered the largest carbon sink in the Northern Hemisphere, an important part of balancing global warming.

A recent study from the German Potsdam Institute for Climate Change Research offers a new – and rather pessimistic – perspective on the issue. The research focuses on a puzzling mystery of AMOC: Are the changes observed in recent years part of a regular pattern or something more sinister?.

The study’s author, Niklas Boers, explains: “From some computer simulations and data from Earth’s past, the so-called Palaeolithic record, we already know that the Atlantic Meridian Circulation may have – in addition to the current strong regime – an alternative, operation. This dual stability means that, in theory, a sudden transition between the two circulation modes is possible.”

Past research over the years has repeatedly suggested that AMOC is weakest in more than a thousand years. However, uncertainty lay in whether this was due to a change in prevalence or, more worryingly, a disruption in dynamic stability.

If it were the second option, then, according to Boers, it would mean that “the AMOC has reached a critical threshold, beyond which a substantial and, in practice, perhaps irreversible transition to a weaker regime may occur.”

Unfortunately, although no long-term observations have been made, an examination of Atlantic sea level temperature and salinity suggests that stability is indeed to blame. Boers concluded, “The findings support the view that a decrease in AMOC is not merely a linear response to fluctuations or rising temperatures, but is likely to reach a critical threshold to which the circulatory system may collapse.”

it may be violated huge impact on climate change. Although more factors are thought to contribute to the global change, it is necessary to take into account effects such as the melting of the Greenland ice sheet and increased melting of sea ice, which ultimately means an increase in the amount of fresh water. Since this water is lighter than salt water, it reduces the amount of cold water that returns to depth and is a key element of the AMOC composition.

it should be further investigated

Given the complexity of the AMOC, scientists do not know how quickly we may see significant changes in weather and climate. For example, such a situation would involve fundamental changes in the amount of rainfall on which food production depends. In Europe, we could see a drop in temperatures, a higher number of extreme weather events and a possible rise in sea level.

according to scientists need to be monitored more closelyBased on how the Atlantic Meridian circulation changes, predict how quickly major problems may occur. “Observations of AMOC variability suggest a gradual weakening in recent decades, but estimates of the critical transition point remain uncertain,” the study said.