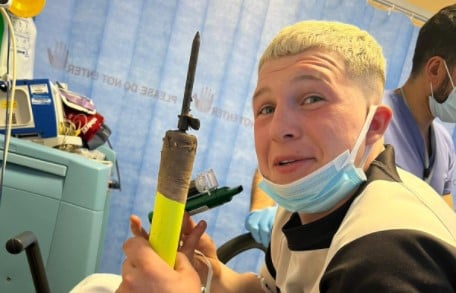 Charlie Mills, an amateur rugby player, had a corner flag stuck in his leg during a match while he was trying, and was hailed as “the toughest man in the league”.

Playing for Saddleworth Rangers in Oldham, UK, the athlete scored points for his team when a metal bracket broke and punctured the back of his knee.

On social media, rugby league legend Barry McDermott, who is also a native of Oldham, posted a photo of Mills, smiling, in the hospital, holding a flagpole. McDermott wished the young man good health.

The Serious About rugby league portal reported that Charlie Mills had surgery to remove the object from his leg, but it was successful. The medical team was also present in the match to provide first aid before taking the player to the hospital.

Fans and athletes sent messages of support on the Internet and wished the athlete a speedy recovery.

Do you want to stay on top of everything happening in the world of sports and receive news directly on your Telegram? Enter Mahanagar Channel: https://t.me/metropolisesportes