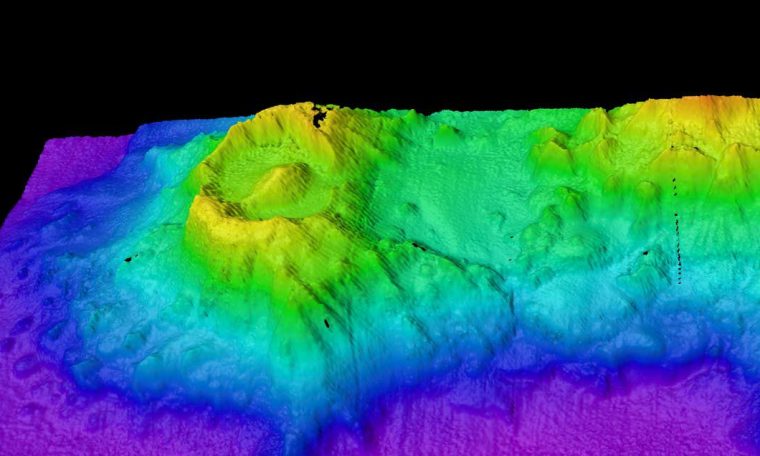 280km southeast of Australia’s Christmas Island, a group of researchers found an ancient underwater volcanic caldera more than 3,100 meters below the surface. Because of its format, the team dubbed the structure the “Eye of Sauron” in reference to the trilogy. Lord of the Rings. The discovery was made by sonar from the ocean research vessel RV Investigator, during an exploration of the Indian Ocean Region (IOT) of Australia, led by the Commonwealth Scientific and Industrial Research Organization (CSIRO).

As the research team mapped the ocean floor near Christmas Island, a large structure appeared on the scientific ship’s screen. With an oval shape, the ancient volcano’s caldera is about 6.2 km by 4.8 km in diameter, and its rim has an estimated height of 300 m – which would be the eyelids. There is also a 300 meter high peak in the middle resembling an eyeball.

When molten magma rises up at the base of the volcano, it leaves behind empty chambers and part of the structure collapses due to its thin crust. Together with him, a caldera appears, resembling a crater. Tim O’Hara, senior curator at Museum Victoria, explains that “one of the few telltale signs is the presence of light pumice rafts floating on the surface of the ocean after being blown up by an underwater volcano.” However, these stones sink quickly when they are soaked in water.

Thanks to the RV investigator’s sonar, the team identified other major structures near the “Eye of Sauron.” Further south on Christmas Island, further mapping revealed a small seamount filled with small volcanic cones, called Barad-dor (“Black Fortress”), inspired by Lord of the Rings. To the south, there is another sunken mound with a flat top, called the Ered Lithieu (“Mountain of Ashes”), after references from JRR Tolkien’s trilogy.

The three formations are located in the Karma Upasi mountain group, which geologists estimate is more than 100 million years old. Apparently, they were formed near an ancient maritime boundary when Australia was to the south near Antarctica. “The flat summit of Ered Lithui was formed by wave erosion as the seamount spread above the surface of the sea, before the seamount gradually returned to the soft ocean floor. The summit of Ered Lithui is now 2.6 ft above sea level. Kimi is down,” O’Hara says.

Another interesting factor in this finding is the diversity of marine species that have adapted to these structures. “Fragile stars, starfish, crabs and insects burrow or skate on the sandy surface,” explains O’Hara. The hope is that the project’s next expeditions will reveal even more of this local biodiversity, as the team believes new species for science will be discovered there.

In addition to the CSIRO researchers, the most recent expedition was attended by scientists from various museums, universities and the Australian Bush Blitz program around the world. The first part of the exploration of the Christmas Island area is nearing the end. The second part will take place through the Cocos Islands region in the north-west of Australia, scheduled for next year.