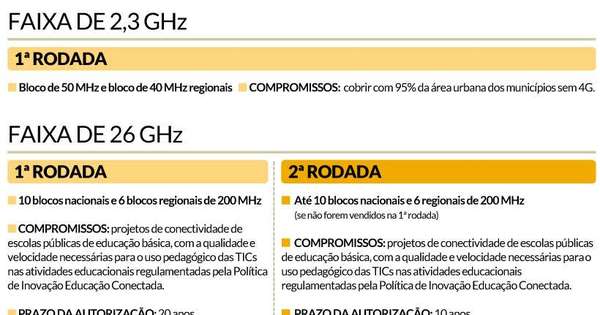 Operators Claro, Vivo and TIM purchased the 3.5GHz (giga-hertz) band, the main band used to offer 5G technology in the world, and was valued at approximately R$30 billion. The purchase was made yesterday on the first day of the 5G auction promoted by the National Telecommunications Agency (Antel). The agency estimates that all offered lots will have a turnover of R$49.7 billion in sales as of tomorrow when the auction ends. Divided into three lots, this was the second finale of the auction. The period of exploration rights for this and other auctioned bands will be up to 20 years. Typical for 5G technology, the 3.5GHz band allows data transmission at very high speeds and mainly covers the retail and industrial sector in urban areas.

According to information from Anatel, a total of R$29 billion paid for the 3.5GHz band will be allocated to meet the obligations set forth in the auction bid notice, defined by the Ministry of Communications and validated by the Federal Court of Accounts (TCU) and by agency. These ideas include, for example, the installation of fiber optic networks in the country’s interior areas and the availability of 5G in all capitals by July 31, 2022.

In addition to the main frequency bands auctioned by the three largest operators in the country, the auction notice provides for another three: 700MHz (already purchased by operator Claro), 2.3GHz and 26GHz. These bands are sold in national and regional blocks and are offered by 15 operators participating in the bidding process. The 5G auction started yesterday morning and was attended by President Jair Bolsonaro and ministers. The event is also organized to commemorate the 24th anniversary of Anatel.

Patria Investments-linked Viniti II Telecom, a leader in alternative asset management in Latin America, won the first lot in the 5G auction’s 700MHz band for R$1.427 billion. The band provides very high-speed Internet throughout the national region and, with its acquisition by Viniti, Brazil receives another telecommunications operator.

The bidding was preceded by the auction of lots in the 3.5GHz band by Claro, Vivo and TIM, which is the main player in the auction. In addition to Viniti, which paid an amount 805% higher than the minimum bid (R$ 157 million) provided in the notice, the 700 MHz band auction had bids from two other companies, out of 15 participants – NK 108, which The band offered R$333 million, and VDF, which offered R$318 million.

It is worth noting that, with the sale of Oi Mvel by the operator in the judicial recovery process, Brazil now has only three companies authorized to provide mobile telephony services nationwide: Claro, TIM and Vivo. With 5G capped at the 700 MHz band, Vinity will soon join the group. For this, the operator will have to comply with certain obligations set out in the notice, such as bringing internet to 31 thousand kilometers of federal highways and places without 4G technology. Granting the Company the right to use the Service for 20 years.

With the new network, Brazil seeks to promote economic growth with greater efficiency for various productive sectors, and connections to more Brazilians, educational institutions and even highways. The bidding process involves a parallel network for the exclusive use of the government, in which it would not be possible to use Chinese company Huawei’s equipment.

The company was specifically excluded from the terms of the notice, amid a geopolitical dispute over allegations of espionage made by the United States.

Definitions for the establishment of the new network began in the morning, with a symbolic hammering by President Jair Bolsonaro at an event in Brasilia, where he highlighted “historic” progress in the country’s connectivity. The Minister of Communications, Fbio Faria highlighted that the country will be the first country in Latin America to have 5G. “We are going to show the world that Brazil is now going to be an innovation hub so that we can get companies, invest (…) and export technology”, he speculated. Of the 15 companies that submitted the proposal, five already provide telecom services in the country. The other 10 are smaller companies, especially those with fiber optic broadband services.

According to Faria, the implementation of 5G could only represent 10% growth for agribusiness, a sector that has the potential to boost to 2.5% of GDP over the next decade.

This network will allow devices to be connected to each other and to the cloud with immediate response times, for example, enabling the development of smart cities, autonomous vehicles or remote surgery. Although the tender took months and the country lags behind others in Europe and Asia, the new technology is expected to arrive in the Federal District and 26 state capitals by July 31, 2022. In the rest of the cities, with a population of over 30,000, 5G will arrive between 2025 and 2028.