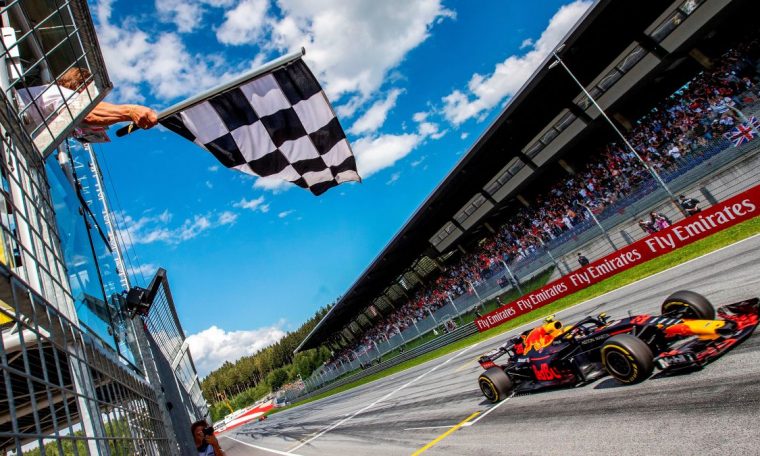 Start your engines, motor racing fans – F1 is back in action! It’s been a long time coming, but the first race weekend of the new-look 2020 Formula 1 season is finally here, taking place on July 3-5 in Austria at the Red Bull Ring in Spielberg. Don’t miss a second of the action – here’s how to watch an Austrian Grand Prix F1 live stream from anywhere in the world.

Sky Sports is the home of F1 racing in the UK, so a bargain Sky Sports Monthly Pass is all you need to see you through the Austrian GP and all of July’s Formula 1 action. In the US, it’s ESPN you want – and the channel’s included in Sling TV’s Orange package, which is currently available on a FREE 14-day trial.

It’s one of eight GPs currently green-lighted by the sport’s governing body, FIA, and will see star British driver Lewis Hamilton launch his bid for a record-equalling seventh Drivers’ Championship – and the Mercedes man has certainly made a blistering start to the campaign, owning free practice on day one in Austria.

As you’d imagine, there aren’t any fans at the Red Bull Ring – but fortunately, getting a first-class F1 live stream has never been easier. The Austrian GP is a start rather than a restart for the 2020 F1 season, as all originally planned races were cancelled back in March due to the Covid-19 pandemic.

Lewis Hamilton is understandably the heavy favourite for Sunday – but at last year’s spin, he didn’t even make it on to the podium. Instead, Red Bull wunderkind Max Verstappen took the honours, with Charles Leclerc second and Valtteri Botta third.

Keep on reading as we explain how to watch an Austrian Grand Prix F1 live stream and provide details of the full practice and qualifying schedule.

If you’re resident in the UK, US, Canada, Australia or New Zealand, you can scroll a bit further down for a guide to who’s showing the Formula 1 Austrian GP in your country. But if you’re abroad for whatever reason, you might encounter a problem accessing your normal coverage in the form of geo-blocking.

You needn’t worry, though – by using one of the best VPN services we recommend, you can whizz around these digital borders and tune in to a reliable Austrian Grand Prix live stream, just like you would at home. Here’s how to get started.

We’ve taken the time to try out all the best VPN providers and we found ExpressVPN to sit at the front of the grid. It works with lots of devices and offers super fast connections across its many servers.

ExpressVPN is the best all-round VPN for streaming at (appropriately) excellent speeds – and perhaps best of all, it has a 30-day money back guarantee plus three months FREE when you subscribe for a year.

How to watch the Austrian Grand Prix: live stream F1 in the UK

This year, there is next-to-no free live coverage of the F1 as Sky has nabbed the rights to Formula 1, meaning you’ll be able to see it all via Sky Sports and its dedicated Sky Sports F1 channel. Subscribers also get to watch on the move using the Sky Go app , which is available on nearly all modern phones, tablets, laptops, PCs and consoles.

For those without Sky, the best option is to nab a Now TV Sky Sports Monthly Pass, which includes all 11 channels – currently £10 off and down to just £25 a month as part of a special three month deal. Taken out at the right time, this should get you access to all eight confirmed races of the revised 2020 season – as well as live Premier League football, PGA Tour, and lots more.

Coverage begins on the dedicated Sky Sports F1 channel at 10am on Friday for the first practice runs, 10.45am on Saturday for Practice 3, 1.30pm on Saturday for qualifying, and 1pm Sunday for the Austrian Grand Prix itself (expected 2.05pm start time)

To access your usual streaming service from outside the UK, you’ll need to download a good VPN as detailed above.

For the 2020 F1 season, it’s ESPN that will be providing broadcasts in the US. Cord cutters are in luck, too, as you don’t have to use cable to access ESPN.

Over-the-top streaming services let you watch TV over an internet connection and can typically be had for a fraction of the cost of even the most basic cable package.

When it comes to getting ESPN, two in particular standout.

Sling TV’s Orange package includes ESPN and offers a FREE 14-day trial period before billing you at $30 a month. If you just want access to ESPN and the F1 action, this is the cheapest way to go.

For a more complete cable replacement solution, consider Hulu + Live TV, which costs $54.99 but comes with over 65 channels including ESPN as well as Hulu’s full line-up of original and on demand content. It’s got a FREE 1-week trial going at the moment, too, so check it out.

On Saturday, July 4, it’s 5.55am on ESPN2 for Practice 3, or things start getting serious at 8.55am on ESPN with the qualifying race. On Sunday, July 5, you can watch the Austrian Grand Prix live from 9.05am on ESPN (build-up starts at 8am).

US residents heading outside of the country can still access the feed they normally use and pay for by using a VPN as per the method described above.

How to watch an F1 Austrian GP live stream in Canada

In Canada, 2020 F1 races are aired a pair of Bell Media-owned sports broadcasters: the English-language TSN and its French-language counterpart RDS. Check your local listings for linear TV details, but those wanting to watch online are well-served by their digital platforms.

The TSN Direct and RDS Direct streaming services cost just CA$4.99 a day or (much better value) $19.99 a month and can be purchased by anyone, regardless of whether you have the channels as part of a pay TV package – though existing subscribers should note they can log in to live streams at no extra charge with details of their provider. They both also offer apps for convenient on-the-go streaming.

See also  Running out of space in your Gmail account: How to avoid it

Canadians abroad can use a VPN to whizz back to the Great White North and watch the streaming coverage they normally do at home – only from anywhere in the world.

Paid-for service Fox Sports is showing every race of the 2020 Formula 1 season and is available to Foxtel subscribers on linear TV.

But Australians can also live stream F1 action without pay TV via great value Kayo Sports , which will give you access to Fox Sports coverage of Formula 1 without a length contract or eye-watering price.

In fact, it’s available from just $25 a month – and it comes with a FREE 2-week trial period so you can see how it works for yourself. It’s also home to comprehensive NRL and AFL coverage, making it a great all-around choice for Aussies.

For the best value, consider the upgraded Kayo Sports Premium Package, which provides three concurrent streams for $35 per month. We probably don’t need to tell you, but if you’ve got mates or family who also like to watch F1, this can be shared and breaks at just over a tenner a head.

Coverage starts with the first practice runs on Friday, June 3 at 7pm AEST. On Saturday, Practice 3 will be shown at 7.45pm, followed by Qualifying at 10.30pm.

On Sunday July 5, you can watch the Austrian GP live from 10pm.

Don’t forget, you can take your coverage abroad with you as well – just grab a VPN and follow our instructions above to take your streaming service of choice with you wherever you go in the world.

How to get an F1 live stream in New Zealand

New Zealand will get the 2020 F1 races broadcast by Spark Sport which costs $19.99 per month. But if you just want to catch one race for free, you’re in luck as there is a 7-day free trial.

Should you go elsewhere in the world and want to still sign-in to watch your subscription you can, then using one of our best VPN recommendations should have you covered.