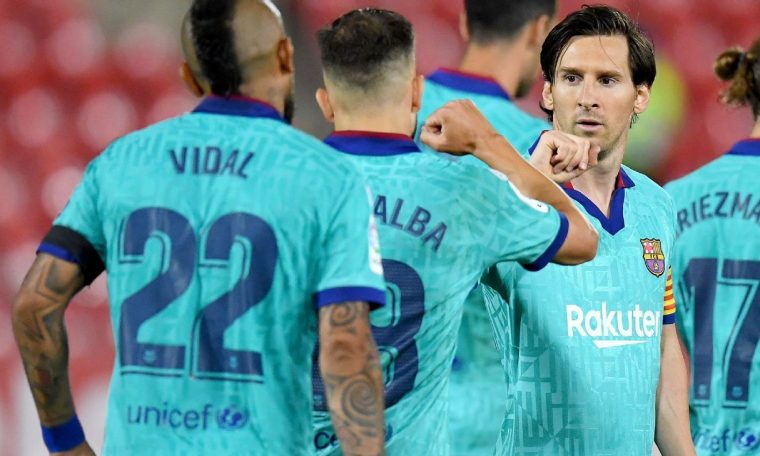 The coronavirus pandemic has made the summer transfer window uncertain, but here are the rumours floating around Europe’s big leagues and beyond.

Mundo Deportivo reports that Barcelona will offer Lionel Messi a new deal that runs until 2023, when he will be 36, as they look to prolong the Argentine forward’s stay in Catalonia.

Messi’s current terms expire in 2021, although he could have left for nothing this summer if he wanted to. However, as revealed by ESPN earlier this month, he chose not to exercise a clause which would have enabled to him to leave on a free transfer.

Thoughts have now turned to tying him down beyond next year. Sources at the club have told ESPN that president Josep Maria Bartomeu is in no rush to get the deal done, with the coronavirus situation and fact Messi’s father, Jorge, is still in Argentina preventing things progressing quickly. But Bartomeu does want the contract signed before his own mandate expires next June and work is underway on the formula for what will be Messi’s 10th professional deal at Camp Nou.

Mundo Deportivo says they will offer him the chance to extend his deal until 2022, with an option for the player himself to then trigger another year to remain at Barcelona until 2023.

Messi, who will celebrate his 33rd birthday next week, has scored in each of Barcelona’s games since La Liga returned last week following a three-month break due to the covid-19 pandemic. After wins against Mallorca and Leganes, they travel to Sevilla on Friday.

Quaresma, 18, has signed a new deal with the Portuguese giants until June 2025, with a €45m release clause. The Portuguese centre-back was recently promoted to Sporting’s first team and has been a target of Atletico Madrid, AC Milan, Inter Milan and RB Leipzig.

“This contract extension proves that this club believes in me and I believe in this club,” Quaresma told his club’s website. “We will remain together for many more years to come.”

10.33 BST: Timo Werner‘s move from RB Leipzig to Chelsea is getting closer.

But the headline news is that winger Ryan Fraser will not. That means his contract will expire on June 30 and the Scotland international should see interest from Tottenham and Arsenal.

09.58 BST: Shkodran Mustafi has told Sport Bild that his future is uncertain. Under contract at Arsenal until 2021, this summer is the Gunners’ last chance to cash in on the 2014 World Cup winning defender, who has gone through rough patches at the Emirates in recent years.

“Because of coronavirus there have been no talks [over a new deal]. Not with Arsenal or any other club. It’s difficult to foresee in this situation how the transfer window will pan out,” Mustafi told the outlet.

The 28-year-old has played in Italy, Spain and England, but has never plied his trade in the German top-flight. Though this could change in the near future as he admitted: “The Bundesliga is always interesting for me.”

09.37 BST: Free agents are incredibly valuable this summer given the economic situation amid the coronavirus pandemic. So Chelsea’s Willian has found himself centre of attention.

The 31-year-old is out of contract at Chelsea this summer and doesn’t look likely to sign a new one.

08.56 BST: Pierre Kalulu is in Italy and will undergo a medical on Thursday with a view to completing his move to AC Milan, according to Sky.

Kalulu, 20, arrived in Milan with his family on Tuesday evening. The French right-back’s contract with Lyon expires this month and Kalulu will join Milan as a free agent on a five-year contract. Milan will have only have to pay the youth development fee for Kalulu.

A reported target of Bayern Munich, Kalulu never played in Ligue 1 but made 16 appearances in the Youth League for Lyon’s reserves.

08.27 BST: Real Madrid have five days to convince Eduardo Camavinga not to sign a new contract at Rennes, according to Diario AS.

The French club return to preseason training on June 22, with players having been on an extended break after the 2019-20 Ligue 1 season was brought to an end.

According to AS, that’s when billionaire Rennes owner Francois Pinault “has set himself the personal challenge” of persuading Camavinga, 17, to put pen to paper on an extension.

The midfielder’s current contract expires in 2022 and any new deal would pose a further challenge to Madrid’s efforts to sign him.

An additional complication is that Madrid aren’t planning to conduct any transfer business until the La Liga season is completed on July 19.

08.00 BST: Arsenal head coach Mikel Arteta has confirmed he wants David Luiz to stay at the club next season after describing the centre-back as a “role model” for the first-team squad.

Luiz is out of contract at the end of this month having signed an initial 12-month deal when joining from Chelsea in an £8 million transfer last summer.

ESPN reported in May that Arteta was keen for the Brazil international to remain part of the squad, a view he publicly stated for the first time when speaking ahead of the Gunners’ trip to Manchester City on Wednesday evening.

“I’m really happy with David,” he said. “I want to keep him here with us. He’s been a key role model for me since I joined. I like what he produces on the pitch. I like his influence around the players and the club. I’d love to keep him.”

Mark Ogden thinks Phil Foden is being ‘wasted’ at Man City and Pep Guardiola needs to stop messing him around.

Manchester City are reportedly edging closer to signing RB Leipzig’s Dayot Upamecano amid stalling negotiations between the defender and Arsenal.

French outlet Soccer Link says the 21-year-old — who has 147 first team appearances under his belt — has long been a focal point for Arsenal scouts with doubts concerning the futures of David Luiz, Sokratis and Shkodran Mustafi.

The report states the defender wishes to play Champions League football. And City could be his preference as Pep Guardiola continues to doubt the capabilities of John Stones and Nicolas Otamendi.

The Express claims that Leicester City lead the race to sign winger Said Benrahma from Brentford, who has also caught the attention of Chelsea and Arsenal.

Reports in France earlier this week first revealed Frank Lampard’s interest in the 24-year-old, but it has emerged that Brendan Rodgers is favourite to prize the 24-year-old away from the Championship side with two years remaining on his contract.

The report says that Brentford want £25m for Benrahma, who signed for the Bees from Nice for £1.5m two years ago. His 21 goals in 71 appearances for Brentford have put Benrahma in the spotlight of several top flight clubs, but in a recent interview he claims to be focused on the job he has at hand.

– Football Insider says Sunderland have accepted a £500,000 bid by Norwich City for academy graduate Bali Mumba. The Canaries sit six points away from surviving the Premier League drop, but that hasn’t stopped boss Daniel Farke from planning ahead for the 2020-21 season with the 18-year-old midfielder expected to join officially later this summer.

– A cluster of top Premier League clubs are said to be interested in Wissam Ben Yedder, who revealed to France Football that he no longer wishes to play for AS Monaco. The 29-year-old has scored 19 goals in 31 games this season, prompting Arsenal, Manchester United, Manchester City, Liverpool and Tottenham to consider the striker. Monaco value Ben Yedder at £40m after signing him for £37.1m last summer.